In the year 2003 on July 23rd, almost 20 years ago, I and 2 friends, Shane and Alan made our way to and area high above Heber Utah in order to follow up on information of monuments and tree carvings which may have been carved by Jim Woolsey who is the key individual in a story known as the Woolsey Mine. We had also heard of a tree which had the name Black Hawk carved into it and was curious to see it. Arriving at the junction of the Current Creek road, pass and Heber, we took a little detour from our planed trip, I don’t recall why but I think it was because an acquaintance was looking for certain trees carved in the 30’s by those of the Clegg family. Apparently he had a story he was following up on, but this being a typical treasure hunter, never told why he was looking for those trees. But it works both ways; I never told him I found the trees he was looking for. 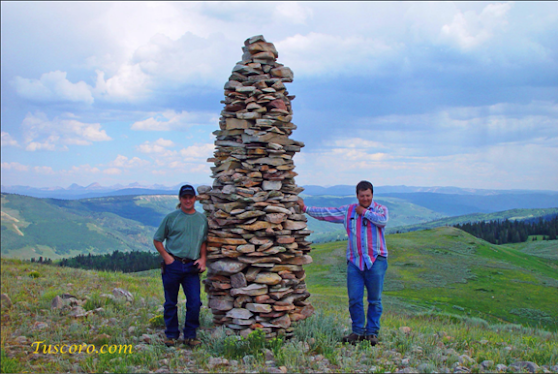 My friends Alan and Shane 20 years ago 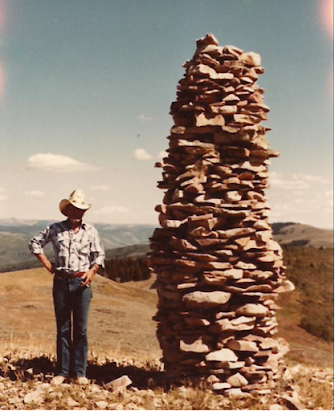 Gale Rhoades at the same monument some 50 years ago 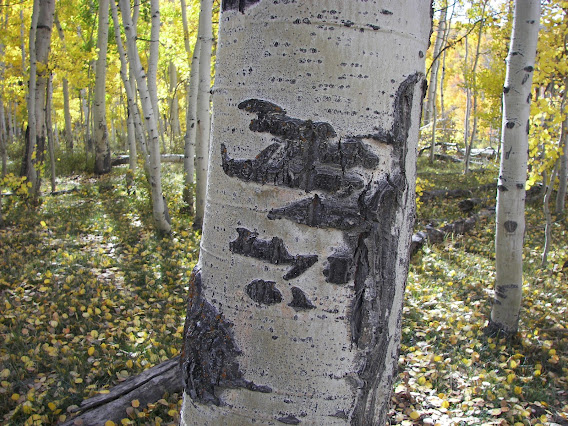 One of highly sought after Woolsey tree

Any way lets get back to my story. As I said, I and my friends had taken a detour as we drove down the old road, something caught my eye and I stopped the truck. A bit shocked my friends were wondering why I had stopped so abruptly. I put it in reverse and slowly backed up and there right next to the road and plain as day was a authentic Spanish carving in an tree. This was my very first Aspen Spanish carving which prior to this event, I never thought possible. Beginning with the academics and spread far a wide was the rumor that Aspens only live to be 150 years old. As I gazed at it I could not help but think of all the so called expert Spanish treasure hunters that had traveled this very road and never seen it. By this time I was wondering due to this rumor how old it must be. 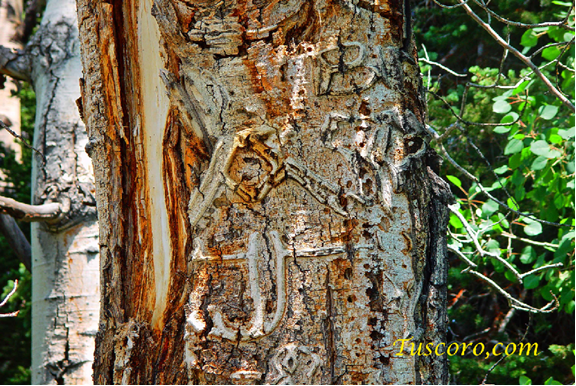 Fortunately my friend Shane just happened to work with BLM in range management and one thing he was accustomed to doing was core dating trees. Shane brought along his increment borer on a follow-up trip. With full expectations of what we were all taught we just knew the tree was going to be at least 150 years old, man were we wrong. Shane began the process and after just a few inches hit what is called heart rot, the only thing you can do if this happens is find a healthier tree at the same diameter as the remaining portion of the tree as a representative of what is missing due to heart rot. Finishing this procedure Shane looked confused, scratching his head he said, I don’t believe it… I’m going to do this again…. After the second time and arriving at the same results Shane turned to me and said, “If I hadn’t seen and done this myself, I would have never believed it, but this tree is just under 500 years old.” Maybe a hundred feet to the North is another tree about the same age and also containing what appears to be an authentic carving. 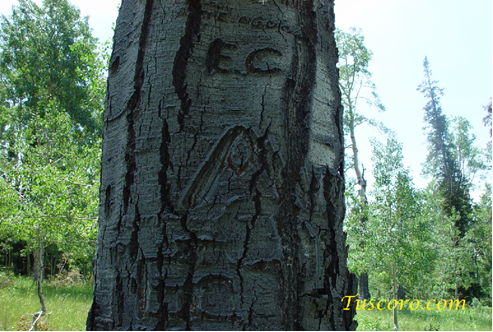 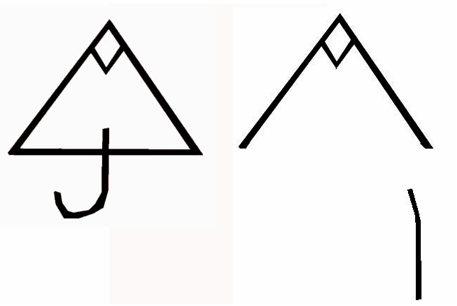 Left: “Turn around and go one league 20 degrees

Since this time I have only seen 5, maybe 6 other Aspens which I believe have authentic carvings on them. If the carving you have found is in question, look at the tree, is the bark a white color all the way to the ground? Then it likely is not old enough to bare an authentic carving.

Between these two trees with carvings is the remains of an old trail and is likely the upper trail head of trail mentioned in the following story.

The following story has been published, I include it because I always say I do not chase story book tails, however I do take notice when the story ties in with something I have found.

About 1925 an old man was riding his horse through Strawberry valley back from the Basin and heading for Heber and after crossing the , or stream at this point, and before reaching , he noticed what appeared as a very old abandoned wagon road. He said the road was so old that even at that time it had very large trees growing up through the road, I have walked sections of this trail at the beginning where he found it, a long stretch in the middle and near the presumed end, near the two trees previously mentioned. Puzzled and curious the man decided to detour and follow the old road which he did to a point estimated at about 9 miles from the pass. At this point he came upon what appeared to be an old rock fortress perched above a small ledge about 10 to 15 feet high and inside the walls were 3 old brass cannons, one 4 man cannon and two 2 man cannons all engraved with Spanish inscriptions.. To the east a short distance were 3 cone shaped depression of what he assumed were old collapsed mine shafts. After probing around for a bit he headed on his way towards Heber.

A couple of years later he told his story to another man and the two decided to return to the site to further prospect the area, when they arrived they found everything just as the old man described with one exception, the cannons appeared to be missing. The old man noticed the south wall of the old fortress appeared as though it had been pushed over and searching around they found the 3 cannons at the base of the small ledge in some heavy brush. They said from the fortress you could see all of the Strawberry valley, and to the west was a jagged ridge of rock like a dinosaurs back, no doubt referring to a Stegosaurus‘s back, and this is no doubt Hogs Back ridge, The trail leading to this fortress is no doubt the same trail I found by the two trees which are within a mile of the area.

In addition to this, the 2 trees give precise instruction on what to do when you find them, and carrying out these instructions and traveling one league or 2 and ½ miles at 120 degrees, you will come to a place which is highly suspect of a mine. I didn’t know it then but years later a friend told me that is Ute friend told him of a old Spanish Camp site and where he use to go to and in a casual walk through this area he could pick up old Spanish paraphernalia such as old spurs, buckles and stirrups among other things. His Ute friend told him that there is a mine nearby, with the presumed camp site or kill site being a half mile away and over the hill. He also told him there is a cache nearby to, my friend asked “where”. The Ute simply said, “wait until sunset and you will see.” Well he did that and he had no idea what he was supposed to be watching for. Perhaps one day I will go there and just wait until sundown, who knows.

Speaking of a cache site… another experience that might be connected to this story book tale, about 20 years ago I was told of and old Spanish mine in Daniels Canyon, a short diversion away from the main trail spoken of earlier, I believe it was written about to a small degree and was known as the Boren and Bethers Mine. One individual claims it is an old wax mine… I don’t think so. Well beings it is easy to get to and easy to find, I decided to take a trip up to poke around. Following the old Spanish Trail and not the Boren and Bethers road and down in a draw, I came across what we then called a book tree because it looked like an open book however in this case it is the symbol for cache and 90 degrees.. the tree fell years ago and I am pretty sure I am the last one who knows which way the tree faced. 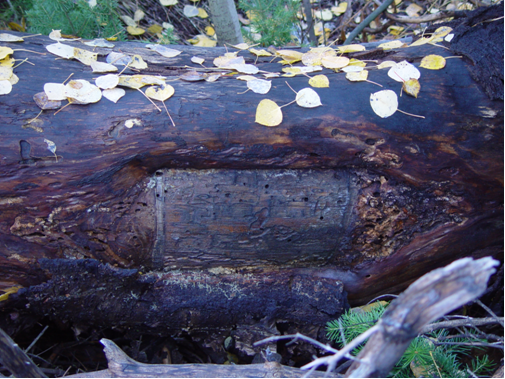 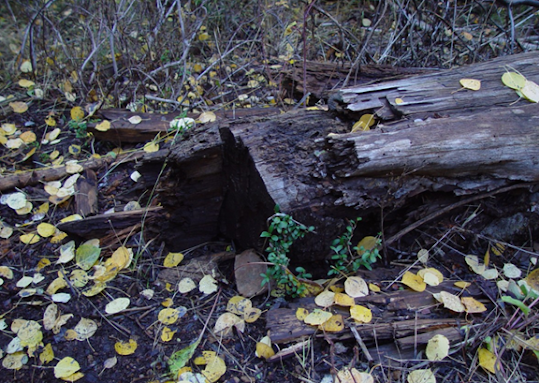 The old wedge tree has also long since fallen

Just a couple of yards away was a wedge tree which if you find one and the spike pointing to the mine is missing, just look around, you’ll find it. I’ve always wondered if the cache which is just yards away, has ever been found. I asked my friend about it and he said they dug a hell of a hole, but found nothing. I knew this friend well enough that I am certain they never found it.

I can’t tell you how fortunate and blessed I feel to know that I am among the last of those who will see actual evidence of Spanish… but I am going to do my damnedest to see that we are not the last….

These are the kind of things that seem to just melt way… slowly becoming nothing more than just a rumor and it seems those who have what it takes to investigate these things, are becoming fewer and fewer, anyone can be a treasure hunter… few can become a treasure finder. 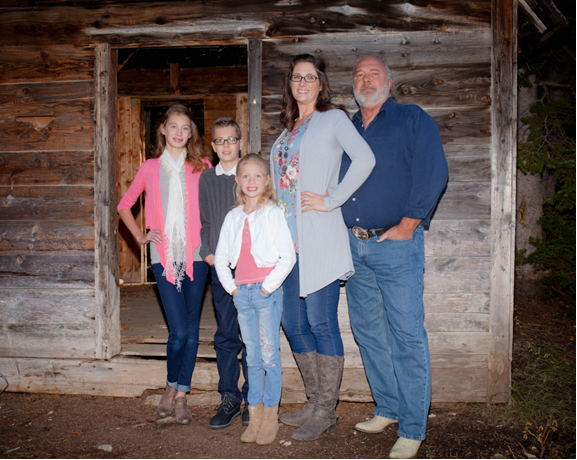 Merry Christmas from the Younger Gang 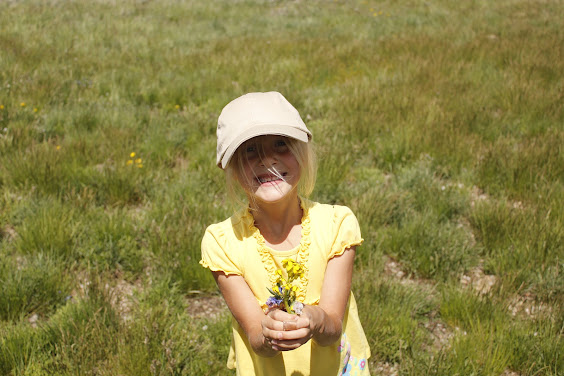 God Bless you all!