Who was Captain Harrison Trow said to have been born in 16 Oct 1843 Allegheny, Blair,  Who was this wealthy man who strolled into territory in 1900 as one of its first inhabitants and became a wealthy Rancher land owner? Who was the man who lived north of town on for 25 years blending in with the history of

His parents is said to be Salmon Trow and Laura Jewett and said to have a daughter Ella Lee, yet on his Death certificate filed out by his daughter, it seams she did not know the names of her grand parents and there is no official record of them linking them to Harrison. The records that do exists list all of his so called siblings but his name seems to be missing where in it should be present as he was a child. 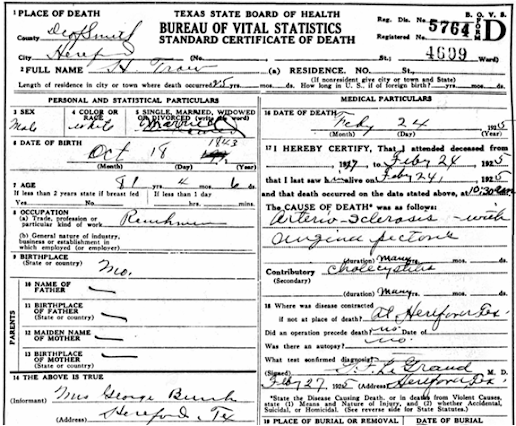 According to orthodox history, Harrison Trow was know for two primary things tied to the Civil War prior to coming to Hereford, one in that he is said to have rode with William Clark Quantrill’s Raiders. If you do not know who they were look them up, however be warned, the orthodox history paints a poor inaccurate picture, most of which is twisted or flat out untrue.

The other thing Harrison was known for, “Captain Harrison Trow,” was he is said to have been commissioned by Governor Thomas Theodore Crittenden of , to identify the body of Jesse Woodson James on April 3rd 1882. But no one wants to talk about how was notified by Crittenden and just happened to be in the area where in he arrived on the scene even before the Sheriff and within 45 minutes of the shooting? Trow lived 140 miles away and Governor Crittenden about 90 miles from .

There is no Birth or Christening record known of Harrison Trow, and no known record of his parents other than unconfirmed entries in the genealogic data bases.

The 1st Record of Harrison Trow is in an 1860 Census report and is listed as living at the George Hudspeth farm working as a farm hand at township . He is listed as being 19 years old however he was only 16. If in fact he was riding with Quantrill he had every motive to hide his true identity which we will come back to.

According to the family George Hudspeth returning home in his horse and wagon, saw the young Harrison Trow walking down the road, George stopped and asked him if he wanted a ride, in talking with him he asked him if he wanted some work and that he could use a farm hand, apparently Harrison accepted, but for how long I do not know. At this time already knew William Clark Quantrill of Quantrill’s raiders. Quantrill’s real name was Elbert DeWitt Travis Born 1847 and Died in 1894 contrary to what history says. 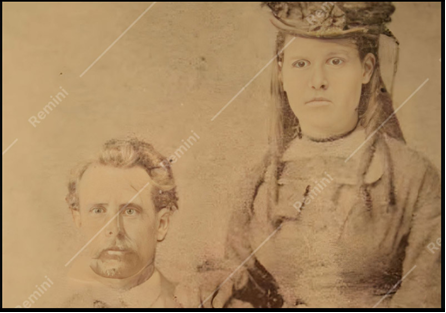 3rd Record of Harrison is in June of 1900 just before leaving , after which there are many records of his existence and it is well know he lived in .

However there are many things the people of did not and do not know about the pillar of their early beginnings. To start with this wealthy Ranch owner and cattleman was not who he professed to be for the 25 years he lived there and his wife was not who she claimed to be, in addition many of those who gathered at the home of Epinetus Bushrod Black, were not whom many would think either. It is highly suspect that Epinetus B. Black was ’s actual son.

So who was Captain Harrison Trow Really?

Before I answer that, let me share a little story told by a man named J. Frank Dalton in about 1948 and published in 1975 of an event that occurred April 3rd 1882. The following narrative is just moments after the supposed shooting of Jesse James, but it wasn’t Jesse who died that day…

From Page 21 of the book

Jesse James was one of his Names

Using photo overlay techniques, below is an overlay progression of ;

Third row, Older picture of Harrison Trow to J. Frank Dalton who in 1946 announced to the world that he is the true one and only Jesse Woodson James. 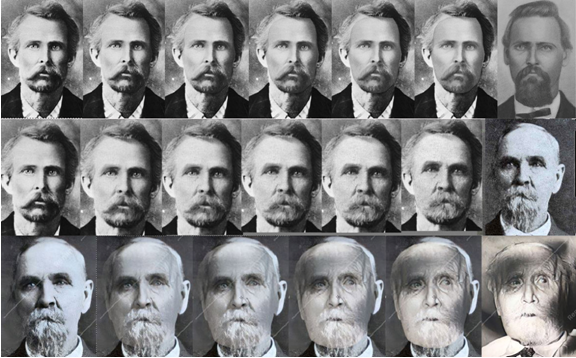 Everyone’s perspective is different, you tell me who Captain Harrison Trow really was.

Missouri Ann Jesse was none other than Myra Belle Shirley who IS NOT the same woman as Bell Starr.

In 1920 2 photos were taken at the home of E.B. Black, seemingly a birthday celebration for Chapley Ross Moreman whom I doubt is his real name. In this photo is Jesse Woodson James, his wife Myra Belle Shirley, thought to be four of their children, and Jesse’s parents Mollie Dalton and thought to have been killed in 1862, George Strother James, 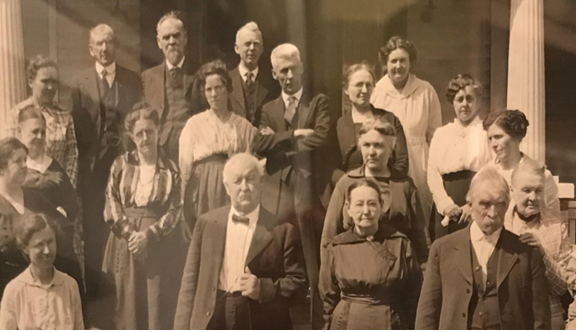