Just a Thank you for all the positive comments... I am sorry I do not respond to them nor make them public, I wish I had time to... I am very grateful to know that some people are reading and waking up...

Posted by Tuscoro at 8:47 AM No comments:

Discovery of A lost Ancient City of the West?

It has been many years since I first imagined discovering one of the now termed “mythical” 7 cities of Cibola said to exist at one time situated around the fabled . I still wonder even though we are told by the so called experts that it is just a myth, but is it? And if not, who built these cities? Perhaps these experts could get a better idea if they would just read the Aztec record instead of books written about them or books written by authors who wrote books about books about them… the regurgitation process is out of hand. 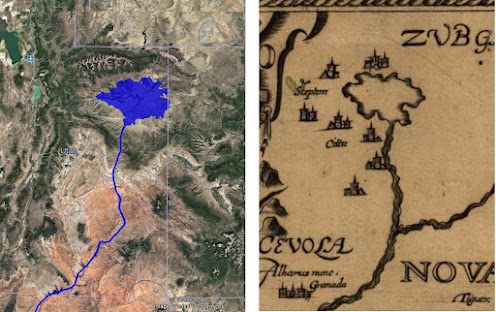 Over the years many evidences have come into play which today clearly tells me the cities most likely actually exist, or at least use to. If you have not followed my research you may find this as speculative, however the geologic evidence, archaeological, geographic evidence and historic narratives, ignored or recognized tell a different story weighing far greater than the mythical label placed upon the whole idea and the effort of silencing the past for seeming unknown reasons. Why does it matter?

Regardless, today I have decided to give the readers an update of my efforts to lend credence to the existence of this so called myth. To somewhat bring the reader up to speed it would be good to read or re-read the two part article:

Finding the Legendary Lake Copala and theSeven Cities of Gold

Of the 7 Cities in question, 3 are believed to have been possibly located, or so the evidence alludes. However today I wish to talk of one such location which came to my attention 4 maybe 5 years ago. One day, in plotting my chosen locations of the 7 cities, which I will withhold at this time, I found situated in a relatively flat valley, an unusual formation which did not make sense as to why it existed. A group of what geologist would call drumlins, and of course every one with any knowledge of drumlins knows that these are created by glaciations, from of course, the “last” ice age. 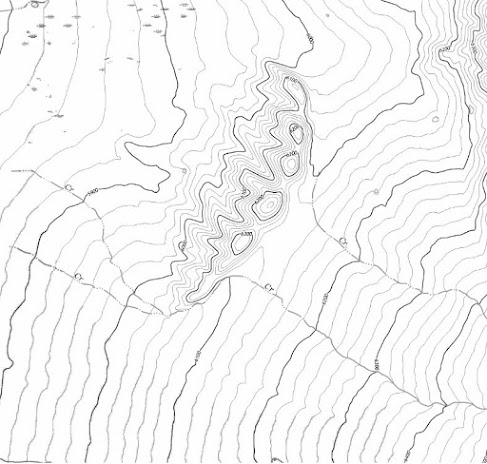 Now I know this sounds bold and speculative, but I say this with great confidence knowing the evidence often ignored, stands behind me… but… In order to have a “last ice age” you would have to have a first one… and I stand on this saying there never has been an ice “age.” However this is not to say that in approximately 2700 BC in the days of Peleg when “the earth divided,” that the events that occurred at this time caused a cataclysmic event instantly freezing the North and South in addition to hurling anything not nailed down, to be casted violently across the ground. If you find this hard to believe, then research the "frozen muck" in Alaska which was ground zero of a violent pole shift where in it is found the animals due to some violent action where shredded and ripped apart. Mammoths were found to have bluebells not only in their stomachs, but in their mouths, keep in mind, biologists claim Blue Bells have been “introduced” into North America, are they suggesting they did not exist in the time of the mammoth? One other location giving evidence ignored is the coast of specifically the Atacama Desert in Chili. This would have been ground zero at the equator as a result of centrifugal force, where in at this pole shift in 2700 BC a massive wave struck the coast and striping it of all vegetation and soil containing the nutrients needing for plant life. This wave would have been so powerful and high that it managed to breach the inland some 400 miles and as high as 12000 feet, sound ridiculous? Now read the academic views as to why this area has no vegetation, and if you have eyes to see, you will find it as humorous as I did. They have taken the results of this event, and turned it into the cause.. how ingenious…

End of rant, Back to the cities… 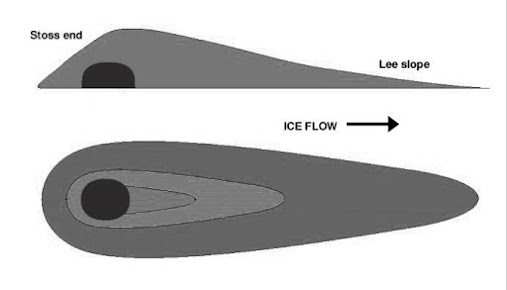 According to geologists drumlins are created as a result of glacial flow but in order for it to begin the process of building the drumlin, the flow must encounter an immovable object such as a natural upheaval cliff formation or large rock such as a ledge or the like. Although possible, I am having a difficult time in imagining a natural upheaval a mile and a half long having 5 peaks. Never would it be considered as a possibility being man made structures causing these 5 peaks serving as immovable objects, I mean… after all there wasn’t any people 14 thousand years ago at the end of the last ice age capable of building such structures right? I propose this catastrophic event resulting in these drumlins was in fact large volumes of water and not ice. In addition to these drumlins, behind them and all the way to the mountain wherein this flow came from is one of the largest alluvial fan boulder fields around. The boulders are found to be from football size to as large as a Volkswagen. 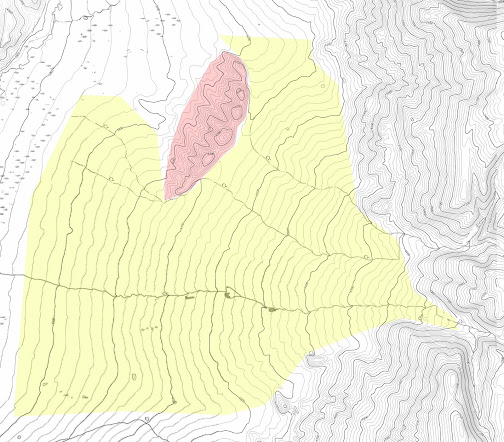 In the book of Isaiah we find,

41:18 I will open rivers in high places, and fountains in the midst of the valleys: I will make the wilderness a pool of water, and the dry land springs of water. 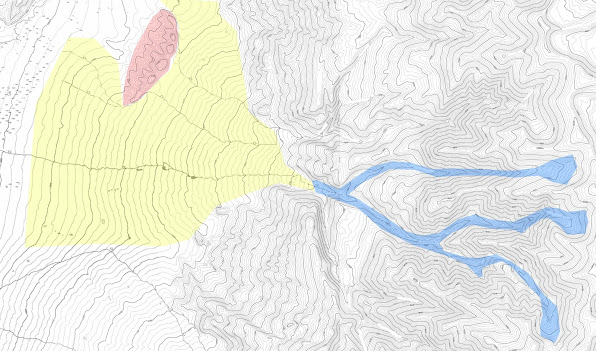 I propose an event of the rivers opening in high places occurred at this location at either the events of the destruction at the time of the crucifixion or an event which I am certain occurred in about 900 AD, an event which I propose is responsible for the Colorado Plateau uplift and the draining and or dispersion of Lake Copala and Lake Bonneville. Due to narrative historic evidences and physical evidences, I would lean more towards the 900 AD event. This is not to say however that another unknown event could have occurred before or after 900 AD.

With the many evidences gathered regarding this hypothesis, it strongly suggest that the immovable objects under the drumlins are likely that of stone structures of buildings by some previous unknown to many, culture. I am caused to believe the structures were either of the Roman Colonies, Welsh, Indo Greeks or other who came here and established themselves in 775 AD and to about 1050 AD. According to the text found on the Tucson Lead Crosses, in 900 AD was a massive earthquake. The city or cities could have also been as a result of those who here came about 100 BC as a result of the sacking of under the thumb of Alexander the Great in 326 BC. There is another possible culture which the Aztec and Toltec derive who are no doubt a mixture of the previous mention, and who first arrived on this continent about 600 BC being of Jewish or Hebrew decent. 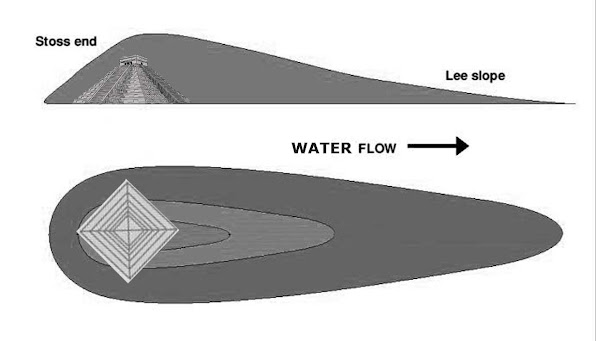 If this hypothesis has any merit and it is found through excavation to be true, no doubt the architecture and artifacts will show who was responsible. This of course would be subject to keeping it as far away from Smithsonian as possible. It is well known and documented as to the many mound cities that existed at this place and other places nearby, one of the most profound was in Parowan Utah where in was found among all the other mounds, a large two tier platform mound just like that of Cahokia, yet not as large. However I am fairly certain the immovable objects are not mounds, although it remains as a possibility.

But before we get all excited about this possible discovery, much work needs to be done first in order to determine if in fact any man made structures exist under the drumlins using ground sonar. At the impact side of the drumlins the alluvial fan of boulders are estimated at 100 to 150 feet deep down to the original valley floor. The peaks of the drumlins reach 100 to 150 feet above the alluvial fan of boulders, this means that from the top of the peaks to the original valley floor, would be approximately 200 feet minimum to the taller peak[s], 300 feet. Just for size comparison, The Sun Pyramid of measure 216 feet high with a base of 760 feet square at the base which would fit nicely under any of the 3 largest drumlins. 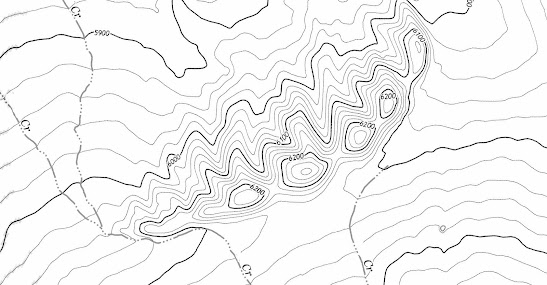 Using an exact size overlay shown below is the city of with a few added structures to show for size comparison. 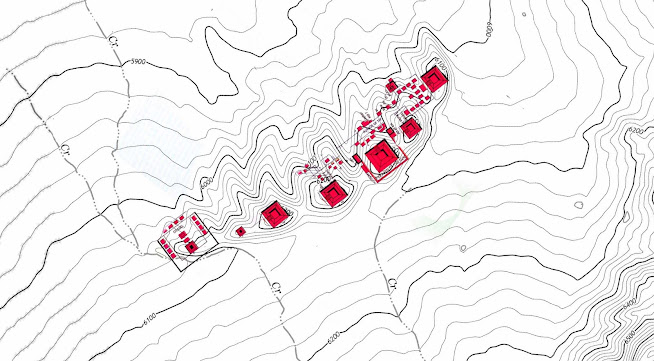 As always, the lack of support is what stands in the way, but imagine what a magnificent find this would be, if in fact it proved to be one of the lost cities of , or that of some other unknown culture. There is so much more to tell and maybe I am being to overzealous in this and perhaps not enough. If I were to tell the people in the valley where in this is located what I believe is there, even after showing the evidences, they would be the first to crucify me... my faith in people has greatly diminished...

What do you think? should I just spill the beans knowing the flack I will catch? What I am more concerned with is Smithsonian stepping in using their many tentacles and preventing any further exploration... maybe turn the whole area into a animal sanctuary, maybe a desert turtle preserve or just a rare grass regrowth area....

If you know of any possible resource to investigate this further and after further consideration, please contact me regarding full disclosure of location but more importantly the evidences not included here will be presented… In my opinion the first and smartest action would be to buy the property which is privately owned, but only after verification of man made structures.  Perhaps next year I will be able to share another seeming remarkable discovery of the same nature made not long ago… The difference is, it has already been determined as being of Greek origin and a physical structure is present, however circumstances stands in the way as always. 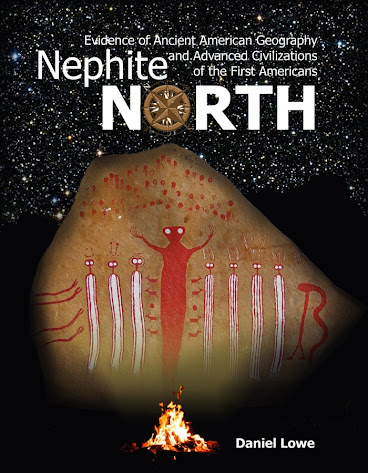