Spanish and Platinum in the Uintas

Some time in 2002 I heard a story reiterated by a friend and local of the Mountain Home area… as I recall she did not know where the story came from but was merely passing along what she had heard, it was the first time I had heard anything concerning Platinum in the Uintas. The story was short and sweet and the kind you simply log into your memory subject to your aluminum intake and at risk of being lost forever. Rumor has it that at some point in the past, Platinum had been discovered by the Spaniards near a narrow canyon and in the area I will tell of next. As the story went, apparently the Spaniards didn’t know what it was, in fact it is said that they thought it was Gold that was not yet ripe. Now I have a tendency to check out things as simple as that statement and I found that at the time of the conquest, 1600 to 1700 we’ll say, that there were indeed some Spanish explorers that did not know what Platinum was and some thought it was un-ripened gold. Well the story went on to say that they smelted the ore and made 200 bars, after which they put it back into the mine or cached it with the intent to come back for it latter hopping it would then be ripe. Well at the time I didn’t think one way or the other as to whether the story had merit,  but a few years later I must say it was on my mind as we traveled up the narrow canyon.

August 31st 2004 I and some friends were traveling up  to an area just North and East of Lake Fork Mountain. Traveling through a narrow canyon I had to stop and discard some bodily processed coffee. During the pit stop I noticed a small stream trickling from the hill side, I recall it catching my attention as I know small steams such as this seam to flow from fault areas and or old mines. 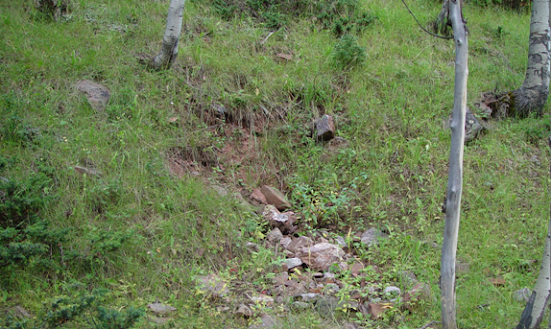 Being close enough to the hill side I could see what was a place where the stream emerged and a place that appeared as sunk in. It just didn’t look right. Walking over to it I said to one of my friends, this is a covered mine. I’m pretty sure he didn’t believe me and for good reason, hell it might not be… but I said to him, if only we could find a mark or something on a tree and I turned around literally 180 degrees to be staring at the tree in the following image. 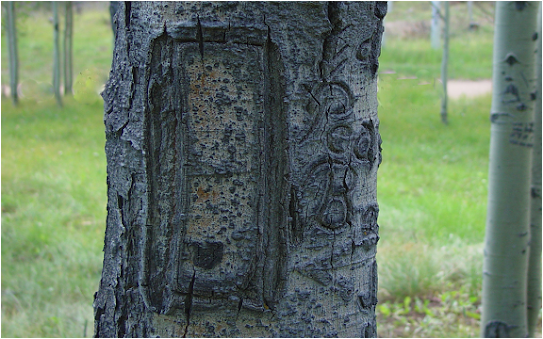 Now before you get all wrapped up in the symbol and the letters let me say that the letters you can see, P, e, a, and a B, are from 1935. Notice the width however of the vertical lines that make them up, in the lettering these are about ¾ of an inch wide. As the tree expands in diameter due to growth these lines cut with a single incision will expand. Now look at the vertical lines on the rectangle, these too were cut with a single incision, yet they have expanded to near 3 inches. My non professional opinion would be this rectangle was carved about 1800 to 1850.

Now what does the rectangle mean? Well, It has two meanings from the Spanish perspective, it means cache, and 180 degrees as apposed to a square which is cache and 90 degrees. So if you are looking at the carving and you turn around 180 degrees you would be looking at the sunken in place previously shown. Could this be the mine or cache of 200 platinum bars? Well I don’t know… lets skip just over the mountain less than a mile from here...

I literally just got off the phone with one of my sources in order to make sure I had my facts straight on the next part. It seems we have discovered where the first part concerning the 200 bars came from. I hesitate to give names because I can be very stingy with my sources but my very good friend whose father is a best kept secret named Curtis.

Curtis passed away on June 1st 2007 my friends prospecting buddy and father, Curtis by all means was not as well known as Gale Rhoades and Steve Shaffer but by all means should have been as Curtis was more connected to the Native people, the secrets and the mining than the former mentioned two and near as I can tell some of the stories they wrote about and perused, came from Curtis. Curtis was a meticulous record keeper who also kept a journal and wasn’t interested in writing books, he was interested in finding the yellow stuff and more importantly, the truth. Curtis left his son a wealth of information that sometimes I’m not sure he even knows… back to the Platinum.

One day Curtis was traveling up a well know canyon with his Native buddy, and was engaged in typical conversation and as they approach one of the many draws in the canyon, his Native friend pointed up into it and said, up there near where the locals get their water, is an old platinum mine once mined by the Spaniards, they found an ore body but didn’t know what it was. But they smelted it and poured 200 bars and because it was a silver yellow color, they figured it was gold that had not yet cured, to my understanding the Natives of the time told them that if they put it back in the mine and leave it for a period of time it would cure and become gold, which they did but never came back for it. This draw mentioned is just over the hill from the previous place mentioned where the cache mark was found on the tree, and as it would seem, an old trail runs between the two sites.

And yet another story that if I am not mistaken found its way from Curtis’s files to one of the many treasure book authors. Near the mouth of the very same canyon that Curtis and his friend were traveling there was an old ranch house, I can’t be certain of the year but was likely the early decades of the 1900’s to maybe a late as the 40’s. Two boys, one of which lived at the ranch house anxious to get out exploring after winter, loaded up the old horses and set off for an adventure. Traveling up the canyon and arriving just below the draw mentioned in the previous story, and where today is a small reservoir, they set up camp. The following morning the two boys mounted their old steeds and continued up the canyon. When they reached a point where in another drainage met with the main river they stopped at what appeared to be a nice flat area that seemed as though was a favorite fishing spot. The boys tied up the horses and set out on a short hike. They came to a small clearing and on the far side they encountered some small ledges forming a somewhat cove. Below the ledges were wild roses or raspberry bushes that they made their way into and discover a hole at the base of the ledge. Clearing some of the bushes away to get a better look one of the boys could see down in the small hole what appeared to be numerous leather bags filled with black rocks. 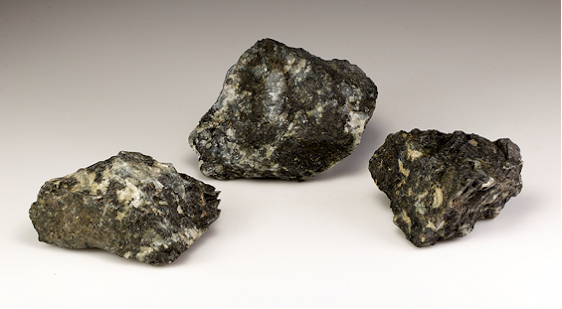 A little digging and a stretch of the arm the boy was able to grab a hold one of the leather bags to try to pull it closer but the leather just crumbled in his hand. Before the boys left the sight they managed to fill their pockets with the strange black rocks. On their return trip the boys were throwing the rocks at squirrels, throwing them in the river just as boys would having a bunch of rocks. When they made their way back to the ranch they still had a few and threw them in an old bucket belonging to the ranch owner.

Maybe a month later the father of the boy who lived at the ranch house grabbed the bucket to use for some purpose and saw the black rocks, taken one from the bucket he was surprised at the weight of it and decided to take it down to with him and drop it off at the assayers office. After making this trip and returning to the assayers office ready to head back home, he asked the assayer, so what did you find out? The assayer responded with, I found out you best find out where it came from, why? Said the rancher, to which the assayer said, because it is near 100% platinum. The rancher upon returning home called the boys over and asked them if they had put the rocks in the bucket, they confirmed, then he asked do you know where you got them, they confirmed again with yes to which they all mounted their horses and headed up the canyon to the very place the boys thought they had tied their horses and set out to retrace their steps, how ever, hours later they gave up not being able to find the ledges or the sticker bushes. 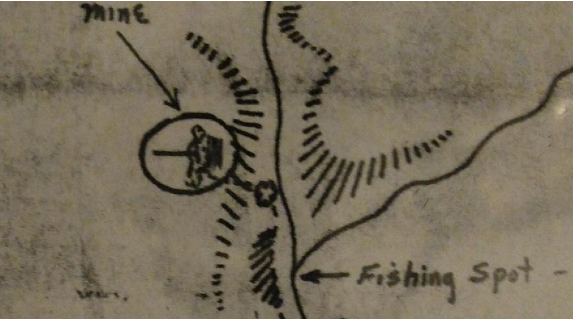 The last living of the two boys drew a map, and to my surprise it is perfect, I don’t understand how they did not find it. We found it the second day out, and I am pretty sure I know why when the boys return with the rancher they did not find it, but that I am going to hold onto that. It's just another of the many projects underway and trying to figure out our next move, it is never easy…. There is always something that complicates what sounded so simple.

So.. upon hearing the first story you can see that it doesn’t create much interest. The second story just gave me reason to pay attention, and then the story of the mine in the draw gave credibility to all of it and finding the trail between the two locations even more so. Then learning of the story of the boys? Well… credibility works both way and now we have way to many coincident. The bottom line, here is… there is Platinum in the Uintas, and especially in one specific area, and the Spaniards knew where it was…