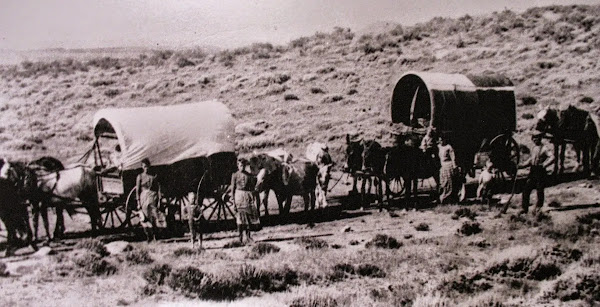 Sometime around 1910 or so, a older California Rancher decided he had had enough of Ranching and decided to retire and maybe try some prospecting in the . The Rancher sold his rather large ranch for a very good sum of gold and silver coin, and he loaded his wagons with all their belongings and his family and headed for . The rancher kept his valuables in a mid sized chest which he kept close. All went well through the entire trip to except a little upset near which separated him from his treasure.

When the rancher came through the pass west of , he looked toward Lehi which was his destination, and saw Indian camps. Now this rancher had a weakness, he was very much afraid of the Indians and even more scared they would steel his gold and silver.

What he didn’t know is that it was a bunch of peaceful Piute Indians, and they couldn’t have cared less about his gold and silver, but no one told him…

Looking at his map he decided he would skirt to the south and travel through another pass and spend the night at a place he had heard of called Mosida, and the following day skirt north and through Lehi, Except… he didn’t quite make it to Mosida. It was getting late in the evening as he traveled through the pass leading into the Utah Lake Valley and for fear of an Indian attack and loosing his wealth, he decided to make camp and bury a majority of his wealth and return for it at a later date.

It would be many years passed when the Granddaughter of the Rancher returned to the valley. Word traveled through certain circles in Lehi of a lady seeking to hire men to travel to the west side of to help her find her grandfathers wealth.  Two young men named Bob and Ira would be two of the men who went with them to search. Bob was one of my Mother and Fathers treasure hunting friends back in the 70’s and Ira was my grandfather. Although searching for weeks and many trenches were dug, they never found the chest and latter the map which she carried drawn by her grandfather was given to Roger of the Cedarstrom Family who also participated in the search and the lady begrudgingly returned to her home in . I have contacted children several years ago, and it seams as though the map is long gone but no matter.

In about 1973 on Easter day, my parents loaded up their truck and headed to the west desert to go treasure hunting again, some of the kids wanted to go and of course I was one of them. My dad being well to do, had a state of the art metal detector with a 30 inch coil, I guess bigger was better in them days. I remember my dad staking an area with wooden stakes and twine. We would cover each square within the grid until every square was thoroughly searched. At this place was several old trenches, side by side, that the hired men had dug. Remnant of these trenches can still be seen today if you know where to look. However, I personally believe they were in the wrong pass.

While my dad and others searched the area I asked my mother what we were looking for, this was the first time I had ever heard the story, she told me that according what she was told, the rancher said that from where he buried his chest, he could see the light from the hotel. The hotel he was talking about was Mosida. Many years later before my mother passed, and we were reminiscing, she told me she didn’t remember saying that and that she thought it was that from where he buried it he could see the lake.

Now how much was actually buried in Silver and Gold we have no idea but the chest contain his personal wealth and the payment he had received for selling the Ranch. Now I have told everything I recall except why I think they were in the wrong pass digging trenches and where I think it is, and why… Someone with the right equipment just might be able to find this one…