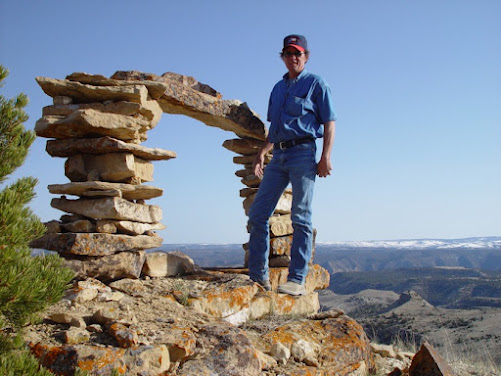 with Darrel Sprecher, the man I credit for its discovery.

A year or so ago, I heard that the  as we have come to call it, was missing… Of course no one would know what had happened until they went up and looked. A few months ago, I took a drive out to where we had first spotted the monument, and sure enough it was gone, I couldn’t hike up to it because of knee pain but I began to plot the possibility of reconstructing it, because I had many photos of it from all angles but little did I know…. I believe it was Darrel Sprecher who brought the existence of it to my attention, our first trip out to the monument and hike to it was April 12th 2005. I recall Darrel being there and Doug Crofts two of my good friends.

We spent a lot of time at this location for documentation, it was clear of the antiquity of the strange monument due to the size of, the hard to ignore Crustose Lichen. This lichen growth cannot be replicated unless of course someone made sure the monument was watered 3 times a week an hour at a time, point being, there was and is no doubt of its antiquity. It was and is one of the greatest finds concerning Spanish explorations into the Uinta Mountains from the  area.

So what happened to it? Well a tornado could have swept through there… highly unlikely. Perhaps a strong wing blew it over or even a deer, a cow or elk knocked it over, but this isn’t the case either. Perhaps someone was so dismayed or jealous that I used the photo for my book the Treasures of Utah and out of pure hatred towards me they destroyed it? possible, plausible and believable but I don’t think so….

Whoever it was that destroyed this monument did it beyond malice, destroyed is not to strong of a word as the rocks used to build it have been scattered from hell to breakfast.

A friend of mine, Chris Davis "Basinite" who shoots some very good videos for documentary purposes, asked if he could visit the site to video it to assess the damage to see if it is possible to rebuild. Well, watch the video, there is nothing left except the base of one side.

Who ever did this, although possible kids or just some dumb asses, it would seem they did it under direction with instructions to destroy and scatter it with no possibility of rebuilding it. If it was someone who was just pissed off or some dumb ass that thought it would be cool to knock it over, why would they go to the trouble of throwing the rocks over the side and down the steep slopes in all directions to make it impossible to rebuild? I have my theories on why and who… but I will keep that to myself for now.

Tornado…. Ya that’s it, it was a Tornado.