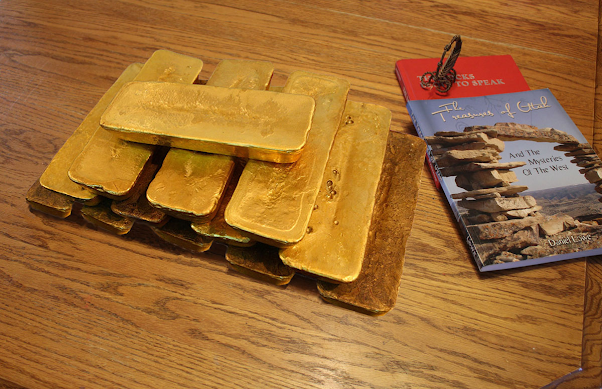 In 1973 at age 14, is when I really began to take an interest in the unknown, the unexplained and suspect untold histories of this land. It seemed as though if there was an unresolved mystery I had an interest in it, Stonehenge, the pyramids of Egypt, the Grand Canyon, just to name a few… this list would grow immensely over the years.

I remember going with my mom and dad treasure hunting, usually some family story, bottle hunting and rock hounding. The idea of finding an old cache from the past always fascinated me, but not in ways I have seen so many who seem to lust after the riches. I can honestly say, that’s not how it was for me, oh sure it would be nice to find an almost forgotten cache, but the excitement for me was imagining those who hid it up and imagining that moment you unearth the very thing they hid so long ago. The thrill for me was more so the search and imagining the discovery or even finding the clues that evidenced the story itself. As far as holding the gold in your hands which I have been fortunate to do many times over the years, I’d rather have a pile of silver.

As many have heard me say, I’m not a treasure hunter, but is that really true? If it is, I won’t admit it. A treasure hunter to me is the guy who gets a story, he formulates in his head where he wants to look and then spend countless hours running metal detectors and other type of gold finding devices over the area, and they turn possessive and don’t share anything. My friends can attest that as long as they have known me, I have not owned a metal detector or any treasure seeking device… why? Because I don’t need it, and if I did, I have plenty of friends with their assorted treasure seeking trinkets. Even in those years where in I and my partner’s business was doing very well I did not own treasure trinkets. I could have easily bought any of the equipment I am seeking today, however GREED and LUST found their way into my business, two supposed friends and I lost everything as a result except what is most valued and that is my family. Even today some 16 years after I met Greed and Lust, I am still financially struggling, but its slowly getting better… at times…  I still focus on the mystery and I feel I have been very fortunate and blessed to have discovered and having been shown so many things that many would never think to even look for, and not all of it is what you might see as treasure.

As far as treasure goes, real treasure hidden up so long ago, I can honestly say because I believe it and have all but proven it… to others, that I have found treasure, real treasure, but some one, perhaps you is going to have to be the one to finish the job. As much as I need it I’m just not outfitted or in a position for the final move, there’s plenty to go around and I am open to just about any proposal.

However if you do not have what it takes and I don’t mean the money, but the attitude, disposition and self control, then don’t give it another thought, I don’t know what it is but as it would seem, as soon as some gets gold in their mind, it possesses them, I have seen personally the lust and the greed destroy their lives. Family is the greatest joy and treasure you will ever have, let nothing divide it.

With that said, there are no less than dozens we’ll say, a list of 75 since I last updated it near 5 years ago, of projects of which any one of them if you can take it to that next level and could benefit any man with real intent. Not all are gold and/or silver. These projects are scattered abroad, Jesse James caches, Spanish Caches, and others, of those in the Uinta Mountains I have targeted a few, however as it seems, the best projects are in Mexico. From to Jalisco and from to the west to . If you see the treasure in as a problem or impossible, don’t give it a second thought, our last trip being our 5th, for public relations purposes was interrupted but the way has since been cleared. The only brick walls are those you build in your mind. Today’s the day, as Mel Fisher use to say.  It is difficult to find that one individual who knows no bounds, with a balance of self control, reasoning, ingenuity, patience, wisdom and yes, compassion and humility, and lets not forget the financial ability. I like to think I once possessed those qualities, but did I? Sometimes I wonder…

Ironically today, I live in a fifth wheel trailer with my wife and 3 kids, we were booted out of the home we rented near two years ago so the landlord could sell it at an outrageous price, and we have not been able to find a place since. When a suitable home comes up for rent, mark my word, 20 plus applicants are standing in line in front of you, fact is, it is probably a good thing as for the last 5 months I don’t know how I could have paid the rent. I struggle each day to feed the family, it took me several years after a series of accidents to find a way to make a living, and after having done that to where I could actually pay the bills, circumstances not of my control put a near end to it and I had to start all over. It’s still not back up and running yet but I am off to a good start. I often look at the irony in all of this and find my self chuckling. If it were not for some very generous friends I don’t know how I would have come this far. I have so many irons in the fire at this time just trying to keep my head above water, I find it more and more difficult to find time to do any research let alone write. The reason I am writing today… aimlessly… Is that I am caught up in my roofing bid proposals in fact near 2 weeks ahead, but as always that can quickly change with a barrage of invites. But even then the battle isn’t over, I may bid the jobs we are invited to bid, but then we have to sell the job. Last year I did not do well but I blame myself, I should have known better, after 43 years I should have known not to take someone’s word for it, check it yourself and bid AS PER PLAN, you see I had been adding a product into my bids I thought had to be there and as it turned out, it did not it sickens me at times to think of how many bids I lost out on for my mistake. Don’t feel sorry for us, we feel blessed and we are happy, we like to think there is a reason for every trial… and we over come them.

Wow… now back to treasure… I often imagine to value of these projects, just one… some I have no idea, others we have a very good idea, of all the projects I have dove into, and if you believe you have what it takes, I have a project for you, and if it comes up dry, I have another. Keep in mind the countless hours I have put into many of these projects, day after day search for clues, mainly to validate the authenticity of it first, and then to find where it may be. All I have left of monetary vale these days, is the research.

In the future when time allows, I will try to write more pertaining to these projects or even new ones… for some reason, some just send me the damndest things, and sometimes original documents. But not all stories I can tell, I just received a new one I wish I could tell, however If I can’t keep my oath of silence I am no better than my two old friends, Greed and Lust.

Thank you for listening to me ramble… and

Thank you to all who have supported me in many ways…

Lets see how many actually read this...