The Fictional or Historical Atlantis? 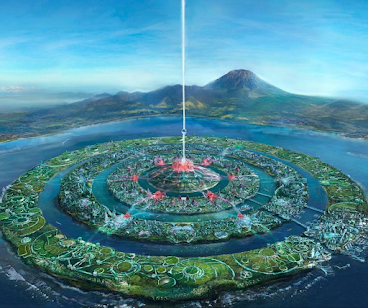 Most of you have heard of the fictional or mythical Atlantis, most of you have seen movies about it and even documentaries proposing the possibilities of it being an actual or at least in part, a real historical place of the past. But what is it you really believe?

Let’s see what the academics have to say from its most public source these days, my favorite and yours… the Wonderful and Wise WIKI.

Atlantis ' of ' is a fictional island mentioned in an allegory on the hubris of nations in Plato's works Timaeus and Critias, wherein it represents  the antagonist naval power that besieges "Ancient ", the pseudo-historic embodiment of Plato's ideal state in The Republic. In the story, repels the Atlantean attack unlike any other nation of the known world, supposedly bearing witness to the superiority of Plato's concept of a state. The story concludes with Atlantis falling out of favor with the deities and submerging into the .

But please read the entire write up on WIKI… it stinks of deception, ignorance, cover up, conjecture and the inability to think things through… But I admit, it could be partially true,,, but allegory? I don’t think so…

WIKI: Many interpreters of Plato ??held?? that his writings contain passages with double meanings, called allegories, symbols, or myths, that give the dialogues layers of figurative meaning in addition to their usual literal meaning.

I wish I had more time…

Before I go down the road to Atlantis, let’s briefly reflect upon a place mentioned in the book of Genesis and located in the Garden of Eden. Eden derives from a Sumerian word edin meaning "plain" or "steppe", closely related to an Aramaic root word meaning "fruitful, well-watered" The WIKI writers pull no punches placing the Garden in the old world, but a shock to me is they actually mention the proposed locations and including the general Mormon perspective being the Jackson County location, however, apparently misunderstood even by those who should know and which is quite common with Mormon doctrine, NEVER did any of the old prophets mention or say the Garden was in Jackson county, IT IS Adam Ondi Ahman that was in Jackson county, it being the place where Adam “dwelt” AFTER being expelled from the Garden, and when he left the garden, he went EAST, so… does this mean the garden is somewhere west of Jackson County? Adam Ondi Ahmen is NOT the Garden of Eden.

The Garden of Eden is described in the Book of Genesis as the source of four tributaries” But the description is like no other, it is said not in so many words, that a large source of water comes from the ground and divides into four rivers. Question… Where on this planet does a large river divide into four rivers? There are plenty of places where four rivers come together to form one, but not the opposite. I only know one place where this has occurred in the past. One of the rivers is described as the river Pison, later to be known as and today it is known as the . It was said that it ran through and/or around a land full of Gold, Bdellium and Onyx stone and the name of the land was Havilah.

Described as an with concentric circles of land, water and land… a friend asked me recently, why did the Aztec build there city in the middle of a lake? Is it something they were familiar with? 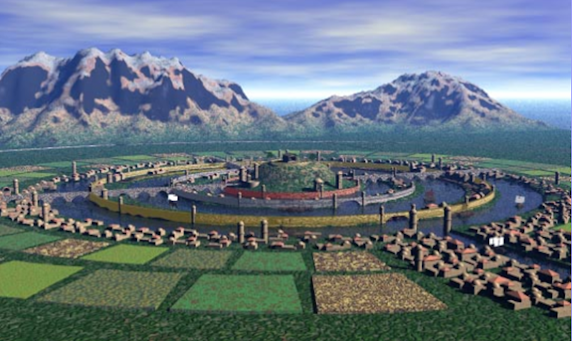 I am reminded of Aztlan of the Aztec

This plain is also described in the Tucson Lead Cross artifacts in the earthquake event.

Lead Cross inscription. "A.D. 880. Israel III, for liberating the Toltezus, was banished. He was first to break the custom. The earth shook. Fear overwhelmed the hearts of men in the third year after he had fled. They betook themselves into the city and kept themselves within their walls. A dead man thou shall neither bury nor burn in the city. Before the city a plain was extending. Hills rung the city.

Back to Atlantis, here on this land we have a huge gap of missing history, even bigger from the academic point of view, academia has tried real hard to fill that gap with stories of barely human people… basket makers, hunter gatherers, paleo Indians, etc all words designed to satisfy the casual thinker and reader, and it worked for the most part.

Based on the description given by Plato, ANYWHERE west of the Pillars of Hercules could be the target, I don’t know why some still try to fit it into the . According to Plato, it is on a large continent, larger than he says. I don’t know that is larger than Asia but close enough, He also mentions two large Islands, could he be referring to North and ? Maybe…

If Atlantis actually existed and it was on this continent, there is really only one people it could have been given the erroneous date Josephus gave of 9000 years. Or rather, repeated from what he had heard or read, it would have been more accurate at 4400 years since their arrival on this continent. This people or what I would call the first Americans or inhabitants on this land since the great flood, if you wish to see what they may have looked like and you don’t mind your bubble of blonde hair and blue eyes being burst, then go look up the people still abundant to this day, and other than size, haven’t hardly changed at all, the Altai Mongolian, some call them Jaredites.

They were here 1800 years! you gotta hand it to them for it is iniquity which brings people down even unto their destruction. Their destruction came down to the conflicting pride of two Kings… Those who survived last this great battle, the blood of them flows through the Native people of today especially here in the west, in the form of DNA Haplogroup A, B, C, & D. Their literal remains from this great battle still remains to this day, and if I told you where, a majority would never believe it. If curiosity is too much for you, take a drive out west of Fillmore to what’s left of , get out and walk around, and contemplate the biblical story of ’s wife… maybe it will come to you. Remember, “Ye are Salt of the Earth” or maybe it was just an allegory.

“literally meaning "the isle of fruit [or apple] trees"; also written Avalon or Afalon among various other spellings) is a mythical island featured in the Arthurian legend”

Afflon or Avalon was the very place that the “Mythical” King Arthur traveled to across the sea It is said that when he died he was taken back to Afflon to be buried, just exactly where was this place? 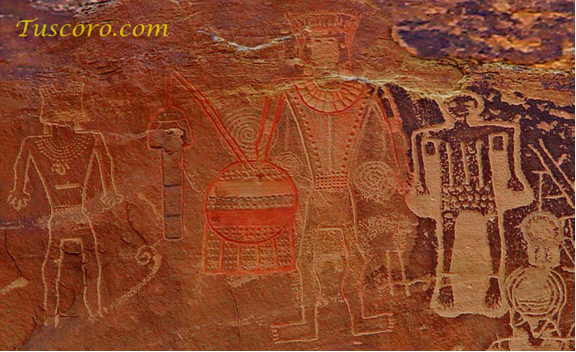 Aztlan is the ancestral home of the Aztec peoples. Astekah is the Nahuatl word for "people from Aztlan".

The Aztec migration story includes two migrations, the latest from across the sea and arriving eventually in having come across the land from the North East, and the most ancient migration having come from the after crossing the west sea. The Aztec are in some part descendants of most of the many cultures who have come to the including the first Americans. Where did the notion of building their city in a lake come from? Is it possible the inspiration came from the original Atlantis which was likely located in the same ?

Is it possible, the name of the , eventually became Atlan [tis] and then Afflon Affalon or Avalon and finally Aztlan? There is what I would call very curious evidence placing the four names in the same place and that all four may be one and the same.

Is Atlantis a fiction or an untold or unknown history? How about Havilah? Affalon or Aztlan? Is the evidence starring us in the face?

Long ago when the Uinta Mountains was surrounded by a vast ocean referred to as by many tribes… was this the mentioned by Plato? Where is the vast oblong plain? And what the hell is the measurement of a Stadia?

Am I saying these place names could have been all the same place? I sure am, and if Atlantis was a mythical fictional place, then so were the others. As far as the large source of water which divided into four rivers,