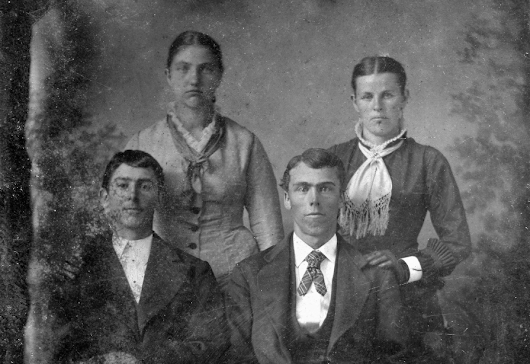 I'm not sure exactly where this photo came from but because it was found on the internet at a tintypers web site, I can only presume it came from EBAY... Some collectors of tintype photos really seem to go off the deep end, every photo they have acquired from their ebay experience seems strangely enough, always someone of the great historic past, and if you do not believe them, just ask them. This photo if I recall was presented on the tinners web site as an authentic photo of Jesse, Archie Clemons and Zerelda Mimms who was Jesse's cousin and the wife of Charlie Bigelow, and as I said, if you don't believe it just ask him.

Now I must admit, in my effort I am really no different than the tinner previously described who presented the photo as Jesse and Archie etc.... So... once again, it is my opinion but again based on circumstantial and extenuating evidence. I do not believe this image is Jesse, Frank and such. But I did take notice of the photo for other reasons. If the tinner bought this photo off of ebay then I'd say he might have got down right lucky... because I have reason to believe that these 4 young adults are the children of Jesse James and Myra Maybelle Shirley and these same 4 children may very well be present in the Hereford Photo. These children are presumed to have been born between 1865 and 1875, which would make these children IF in the Hereford Photo, around the ages of 45 to 55 in the Hereford photos.

Here are the 4 faces believed to be Jesse and Myra's children, see if you can find them in the Hereford Photo. 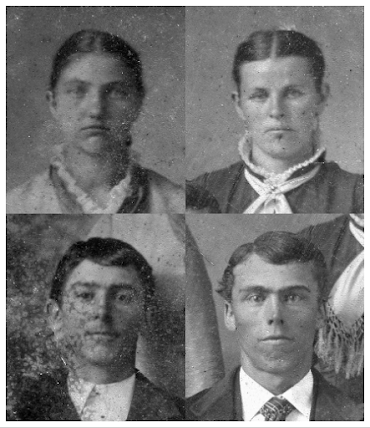