Sometimes the treasure story doesn’t end with the desired results aside from the thrill of the hunt, unless of course you just keep buying the books sucking in new theories to keep the dream alive, but knowing the truth based on the facts might just eliminates one more story.

Although I am not in the habit of chasing after published stories I must admit when I first heard of the Peralta Stones, I was intrigued, curiosity wouldn’t leave me alone. After reading the hoards of stories that had been written about them, the many theories which I don’t understand how pray tell some people come up with these things, I decided to take a look at the stones myself and give the stones some serious consideration. 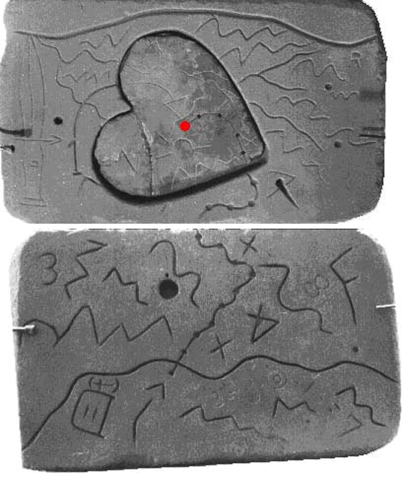 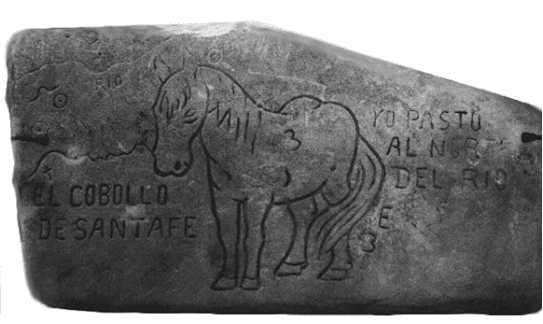 Now keep in mind, I have no doubt as to the authenticity of the stones which so many are anxious to discredit rather than try to prove them. It is so much easier to dismiss that which the lazy mind can’t figure out as a hoax isn’t it…

I believe the stones are real for many reasons which I am not going to haggle about, and the primary reason is, Common Sense, something that the lust for gold just seems to replace. Another is the Peralta story which many seem to misunderstand concerning the lawsuits and court battles regarding one of the Peralta Land Grants which of course ended with cries of hoax and deceit in an effort to cast doubt. My position? The Peralta Claims were legitimate. However the primary reasons why I believe the stones were legitimate is supporting evidence that existed long before the stones were known, a story that has yet to be told and will not be told today in its entirety, however I will give some.

I may also make note at this point that I have not the slightest idea where in anyone can tie the Lost Dutchman story to the Peralta stones or why it ever was? Do we suppose that because the stones were found at the foot of the mountains that the Dutchman supposedly came out of that this somehow makes the two synonymous? If some wish to go chase the Lost Dutchman mine based on the few details that were actually given, I am sure I won’t be the first to step aside and let them have at it. With this said also keep in mind that my take on this is also just a theory, and by the way, I can’t understand why or how treasure has ever been associated with the stones, I see no indication of treasure… Implications maybe. As I recall, and I don’ know how one comes up with this, but one story even places the location of the Peralta Stones Map in Johnson’s canyon east of Kanab? Are they Treasure specific? No, but directions to a substantial Silver mine? Yes.

The point in mentioning this, although I don’t see it, is we should not suppose the stone map as relating to the area they were found, for all we know; the two obvious drainages on the stone map could be two drainages in , but it isn’t.

However…Let’s look at the Peralta stones and keep it as simple as it really needs to be.  The Stone were reportedly found between and Gold Camp along the Highway to Florence Junction to Apache Junction, I have no problem with this whatsoever or the claims made by the finder. I have heard and read many reasons as to why the stones were found where they were, personally, I couldn’t care less, the point is, they were found, anything is possible as to how they ended up there…

The first thing I am going to prove or disprove TO MYSELF is the obvious drainages on the map with the assumption that the stones were actually found in the area it applies to. Although I have had a hard time wondering how anyone assumes the upper river shown on the Horse Stone and the Heart map is the Salt River, I guess I can slightly see the possibility?..  no wait… I’m sorry, I can’t.

The top drainage shown on the maps are in my mind, clearly Queens Creek NOT the Salt River, if one would take the time to highlight the 3 rivers in question on Google Earth or even a 30 minute USGS it becomes very apparent as to which two rivers were intended. The visual evidence weighs heavily in favor of the hypothesis. If the following is true, the whole story has been misapplied and the focus is in the wrong mountains! 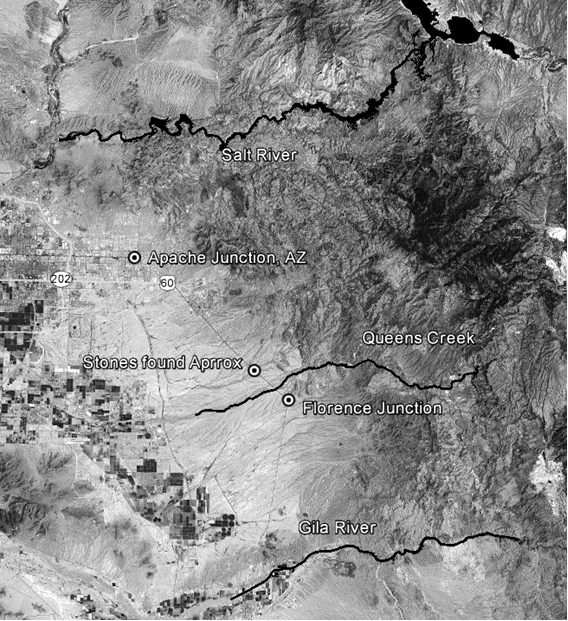 The 3 possible drainage’s of the Peralta Stones

Now like I said, I have no idea how the stones got to where they were found, but regardless of how they got there it would seem plausible to me that they were no longer needed and discarded. The Peralta Stone Map was not a map to a Treasure, it was documentation of one of the Peralta family Mines Likely a Kings Mine dedicated to Queen Isabella II. The next image should sum it up and I will leave it to the reader to weigh the common sense, and I could be easily mistaken. 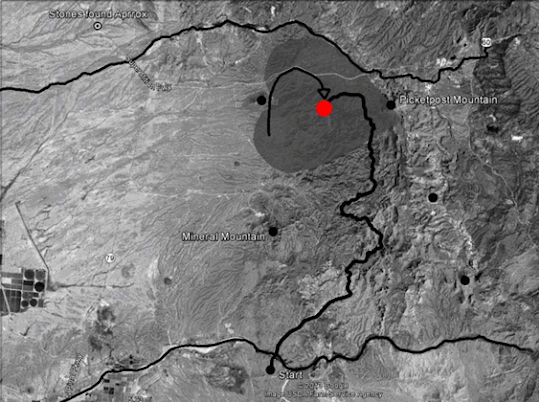 Lets dive into this just a bit further…

I will not say what my conclusions regarding the Reavis Peralta Land Grant trials is, but I will say I smell a rat, although Reavis may have been a rat, there was a whole lot of deceiving, slandering, forging and a lot of fabrication of evidence going on by the opposing party whom we might refer to but wrongfully, as our wonderful trustworthy Government.

Just a few years after Reavis’s claims, and unknown to most and never was there a connection made regarding the Peralta's, a man shows up on the scene in with what might appear as just dumb luck. 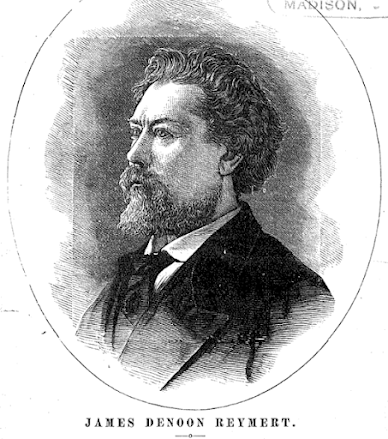 James DeNoon Reymert a Nordic born man who later moved to where his mother was born as Jeanette Sinclair, interesting name… After a life of Law, Politics and other ventures none of which was mining, Reymert ended up in New York but supposedly due to health issues, I suspect otherwise, it is said he moved to a ranch located in the Biobio River area near Mulchen Chili for 3 years, I wonder whose ranch it was?...   Now most would just read on past this, but not us! Oh no no no… The Peralta family name has been in Mulchen Chili in the Biobio Providence since before 1750 and is STILL today a prominent name in Mulchen.

My question is, did Mr. DeNoon know where and why he was going before he went?... I’m sure it is all coincident as much as the following. Now after his 3 year sabbatical in Chili, DeNoon returns to , but surprisingly not to or where he frequented previously. No no, he lands in and heads straight to , perhaps due to health issues… and according to WIKI, with no mention of a miraculous discovery, he simply organizes the Reymert Mining Company… Why?... what a strange thing for someone to do with no mining interests… What? He just got lucky by traveling out to the hills one day and said to himself, hmm, I think I will organize a mining company… But it gets better, Mr. DeNoon just happens to organize this mining company at a location that turns out to be one of the larger silver strikes in Arizona, and it just happens to be at the Exact spot indicated on the Peralta map if you interpret the map correctly according to the correct drainages…

My guess would be… The Peralta stones if found at the claimed location of “near Apache Junction” were not where some poor Spanish soul lost the stone maps, but where DeNoon cast them away no longer needing them after receiving them from the Peralta family personally and after coming to a business arrangement with them and re-locating the mines.. I would love to see DeNoon’s financial records of the day.

A partial point to this article is to show you that there is always another perspective, whether right or wrong remains to be seen but that is for you to decide, whether you have done your homework or not. Reason every little detail, question all things, and remember these words, It is what it is. Knowing when to accept defeat however, is knowing never to accept it. 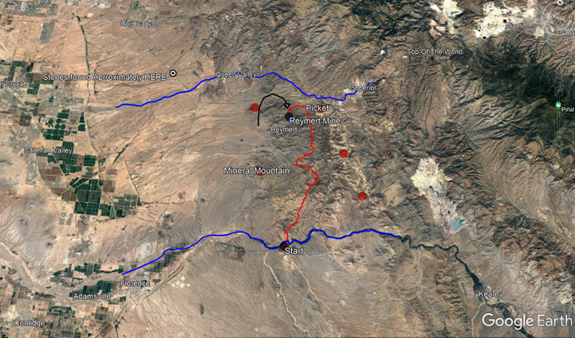