One could not count the many treasure stories created over the many years of the creation of this country, train robberies, bank robberies, Spanish related caches left behind, unfathomable incidents of mishap of those who hid up their wealth due to the lack of trust in banks, or other reasons and those who hid it up, passed on unexpectedly or simply could not find it again…  on and on the list goes…

Is it possible that 8 to 40 Million still sits just under the ground surface in an old small town after near 140 Years?

One such story occurred in what would become a semi thriving mining town in .

It was 1883 when two prospector/miners in the area, heard of good fortune in the mountains of , the two men were fairly successful at this point and had pooled their gold coin money together with the intent of buying up as much placer ground as they could. When the two men arrived at their destination they discovered that the rumors that brought them to the area were not as truthful as originally thought. The area they desired was full of gold hunters and was wild and rough. The two men decided to cache their money and go work another area further north until things calmed down where they wanted to go. The men chose what they believed to be a safe place and marking 3 trees, buried their wealth in an old pot.

After about a year the men returned to the area to find it had definitely calmed down, but they also learned that a fire had recently swept through the area where they had buried up the gold coins and the trees were gone. Having a general idea as to where the trees were the men search for days and after many days, finally gave up. One of the men returned several times to the area again to try his luck and in 1915 again, but to no avail despite the other mentioned landmarks still existing.

The amount the men buried was 85,000 in Gold Coin, this would be about 8 million in today’s gold value, and the numismatic value could easily be as much as 5 times or more. Although the search area is not exactly small, it is still possible that if it is still in the ground where it was originally buried, it could be found, parts of the search area has no doubt been developed but a lot of area is still open for search, it would be well worth ones time to spend looking for the prospectors gold. Is there a technology that might narrow the search? 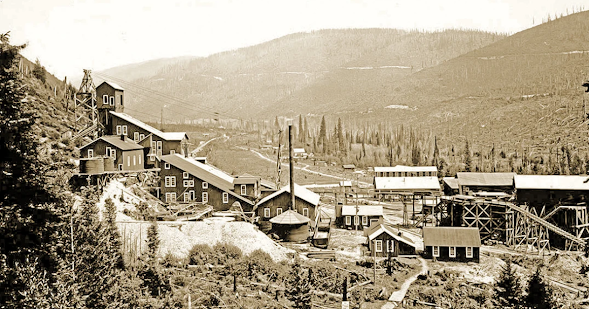 The Search area between “the old mill and the depot” includes about 3 dozen homes with back and front yards, a few roadways, asphalt parking lots, Ball parks and city parks. Is it possible it still sits in one of these open areas undetected?