Over 12 million in Gold Coin 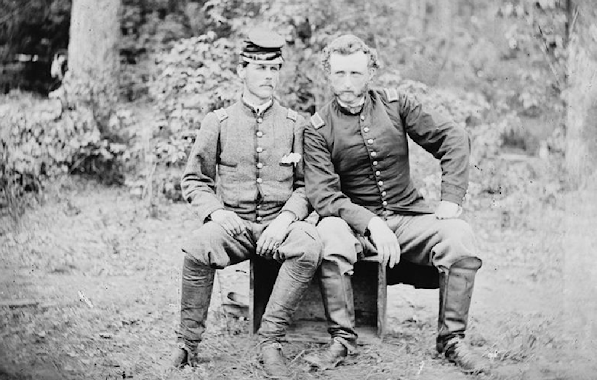 Photo (Courtesy of the Library of Congress)

with his captured Confederate friend from

The following story may be familiar to some, and again I ask please if you know the location please be silent about it. Again there are some who just don’t need to know.

In March of 1862, the and the Confederacy had been playing cat and mouse for almost a year since the Father of Captain John James fired the first shot that was heard around the world. 9 months later the North was on assignment to deliver a payroll to various out posts.

It is said that the North was carrying about two months payroll for near 3000 men, average pay at that time was $20 per month. Privates were paid about $13 dollars a month up to a Captains pay at $115 per month. Another report says the payroll consisted of $125,000; there is no indication of whether it was $10 or $20 gold pieces. It is likely that silver was not present in the payroll due to weight issues. If it were gold only it would be about 520 lbs.

During the heat of the battle Captain John James come across the payroll wagon of the North he says he seized the payroll and dumped in a hole with no witnesses. Resources with personal knowledge say no one ever went back to recover it, even though a few had every opportunity, they did not mainly because they didn’t need it. In 1946 one individual with personal knowledge said, As far as I know it has never been retrieved, and if it had been recovered, it wasn’t reported.

To this day, the hole still exists and about 30 to 40 feet down is likely over 12 million in gold and that’s the actual gold value. The coins are no doubt fresh minted coins. Collector value could be near 3 times that amount and in some cases certain 20 dollar gold pieces can fetch as much as $50,000 EACH.

But all good tales have a down side… first and foremost if we are to be honest with ourselves, we must accept that there is only a 50% chance it is still there, it either is, or it isn’t, simple as that.

Now there are the land issues, how does one gain the right to the hole? Guaranteed the Fed is well aware of the missing payroll and if one were to find it and make it known, they would be all over it like feds on Mr. Taylor. Make a deal with them? LMAO! I doubt even if a deal was made, a deal would be honored. Besides, as far as I am concerned it doesn’t belong to the Fed.

I am not posting this for discussion; I am posting it to share. Equipment is not what is needed on this project, what is needed in this case, is a very creative mind time and I am sure some expense.