Finding the Legendary Lake Copala and the Seven Cities of Gold 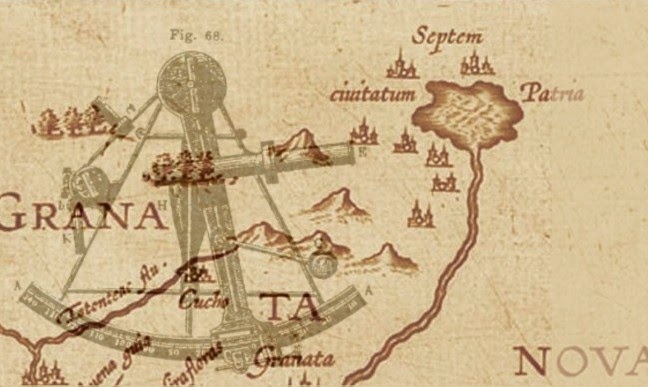 The Origins of the legends of   often associated with the 7 cities of  are obscure to say the least, and to find the origins is not easy. It would seem the earliest mentions of Copala are found in the record of Francisco de Ibarra who was placed at the head of an expedition in 1554 sanctioned and likely funded by King Phillip II. In 1562 he headed another expedition and in the commentary I was reading, it is said that “he was searching for the fabled golden city of  (also called ).” However, there was NO city of , and  is NOT another name for Copala. Copala, Copal-lah, “lah or ah” making it possessive as in the place of Copal, was a lake which likely received its name from Nahuatl origins and as a result of the Copal tree which was found to be growing all around Lake Copala. Copal-chi is a smaller variety and has its origins in Central and . Copal is said by many sources to mean “Incense” and this is a narrow view. The Meaning of Copal is unknown, other than it refers to the tree which is a source of the resin obtained from its sap which is used for incense, and other things, and is likely synonymous with varieties of Frankincense and Myrrh along with Palo Santo meaning “Holy Wood” or Bursera graveolens, AND which is of the same family (Burseraceae) as frankincense and myrrh, Why is this important to know? You will learn this in the Forbidden Histories of the .Copali is also said to be a Nahuatl word meaning “incense,” as well and this is not so either, Copali is the sap or resin that comes from the Copal tree that man uses for incense and other things. The earliest know reference to the   which was in the “ of ” that was never found, may have its origins with  which the records insinuate he may have heard from El Turk, either a  or a Pawnee Indian. I have not yet been able to find an earlier reference…
Why the sermon?Legends have a way of being twisted into conjecture and as a result become legends themselves such as the Legend of Moctezuma instructing 2000 of his warriors to haul hoards of Gold back to their ancient homeland of Aztlan, and it simply didn't happen and there is no foundation to this concocted legend, HOWEVER, there are some truths within, as the fleeing Aztec DID return that which was highly regarded by them, It just wasn’t gold and silver as you have been led to believe…It is my intention to show that when I research the things which I write about, that it is from the most original resource material available, not wiki or other internet resources which are often speculative, unreliable, intentionally misleading and I might add, not true in the slightest.With the forgoing said, I want to bring your attention to the many maps of the 15th and 16th century, which show a definite lake situated at the unmistakable place of the Uinta Basin of Utah. Many suppose the  of  was in , according to the earliest references made by Spaniards full of pride, boasting to have found this place but all of them were lacking one clear identifier, a lake. The cities shown on these maps referenced as Tontonteac, a principle city although not the Capital city and of the land of Granada, which was located at the North end of Lake Mead and is now five miles under the reservoir, it is now known as Casa Grande of Nevada and has been downplayed extremely by Academia. Tontonteac or should I say it’s location is ancient in that it is the very location of the FIRST landing or city on this continent since the great flood of the Bible, it was first known as Anahuac of the most ancient Aztec. The other cities such as Abacus nuc , Marata, Axa, Chuco, Tignas, Cibola etc and according to these maps, were not of the  of , they are of the  or Granata, and were given their names by a latter people who arrived on this land in about 100 BC. The archaeologist who participated in the archaeological discovery of a city east of Washington Utah, do not even know it had a name and that it is found on a 15th century maps! 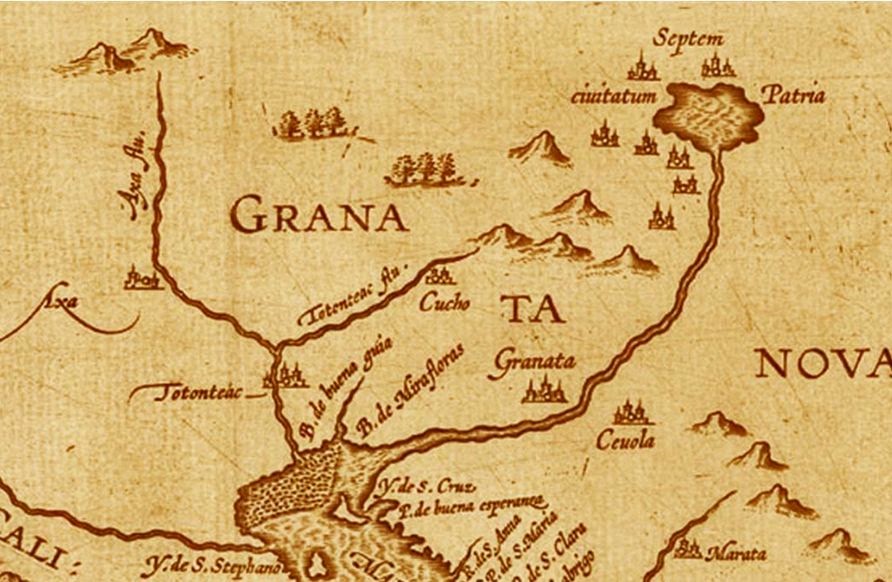 A portion of the Granata Nova Map of 1597 by Cornelis Wytfliet
Those who made these maps such as Herman Moll and publisher Cornelis van Wytfliet, were merely operating on fragments of information that they had gleaned from the Royal families they represented and from fragmented information that the Royal families of that country had kept since ancient times before falling out of good graces with the Roman Empire, and/or England. England and/or the Roman Empire are those who had the majority of the information dating back to the days of King David and King Solomon and in the past had shared parts with Wales, Scotland, Prussia, France, Spain and other countries of the British Isles through the Royal ties. However by the time  and  ran off looking for their seemingly newly acquired information of their day, it is clear that they only had a small part of it, and one part of that is what tells me of its authenticity and gives credence to the previous seeming speculative chapters. 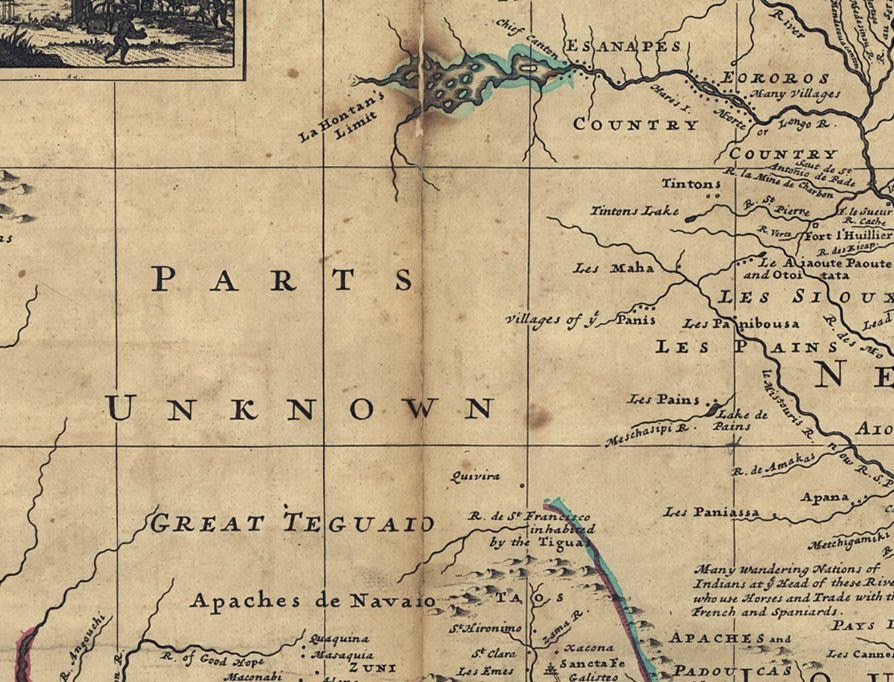 The above Moll map escaped my view for some time largely because of the river shown exiting to the east, however on closer examination, it would seem that it is the same lake the Spanish were looking for not only because of the shape, but its location on the map. It is 50 miles from  to  and 300 miles from  to the Basin area of Uinta county Utah. The Moll map showing  and , if one measures the distance between the two cities, they will find that using this distance times 6 will give you the distance to the lake shown on the Moll Map. On the Moll map Moll makes it clear that many parts of his map is taken from ”Original” draughts of Blackmore and Berisford, and others never before published. It would seem it was common for Cartographers of the day to glean as much information from other maps which makes sense as a practice. The Piri Reis map of 1513 when discovered showed a great deal of accuracy in the new world, and an ICE FREE ! It is said when the map was found; IN 1929, A GROUP OF HISTORIANS found an amazing map drawn on a gazelle skin. Research showed that it was a genuine document drawn in 1513 by Piri Reis, a famous admiral of the Turkish fleet in the sixteenth century. His passion was cartography.Piri Reis high rank within the Turkish navy allowed him to have a privileged access to the Imperial Library of . The Turkish admiral admits, in a series of notes on the map, that he compiled and copied the data from a large number of source maps,some of which dated back to the fourth century BC or earlier.Where are these maps today?Looking at the Spanish Granta Nova map of 1597 and the French Moll map of 1715, it would appear the Spanish were leading in the amount of information the two had. I say this because of the uncanny resemblance of the  shown on the two maps compared to the following images.In the Uinta Basin of Utah, it is a well known geological fact that nearly the entire eastern half of Utah was covered by and ancient ocean, and it is a well known fact that after this ocean had dispersed, a lake remained of which geologists call Lake Uinta and it is well know the boundaries of it due to the fossil ripples of sand that clearly shows its boundaries, this occurs at the elevation of approximately 6000 feet and down to its lower levels of about 5500 feet. The problem is, science tells us that this lake has not existed for 33 million years. The two following images are the ancient lake according to 30 minute USGS shading techniques used from the All Topo Map program and overlayed onto Google Earth, in other words the boundaries you see in the Google Earth images are quite accurate. The first is showing the ancient lake boundaries at a lower level of about 5500 feet and compared to the Granata map. 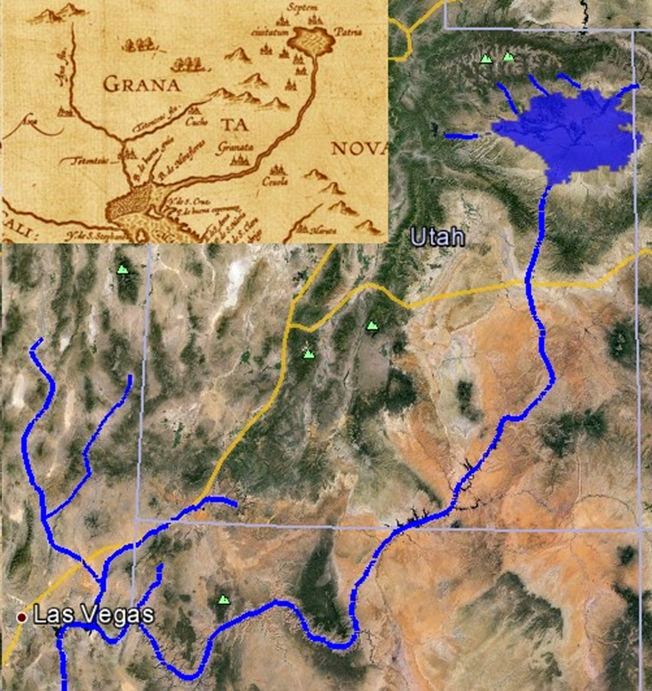 The 33 million year old  on a 400 year old map, How could this be?
The following image is the same 33 million year old lake highlighted at 6000 feet and shown compared to the French Moll Map of 1720, keep in mind it is very clear in the document of Baron de Lahonton’s 1688 Journey of the Long River, that he never made it to the Lake he was looking for, so how is it that the map maker got so lucky? Who was it that seen the lake and apparently documented it long before Lahonton’s Journey? 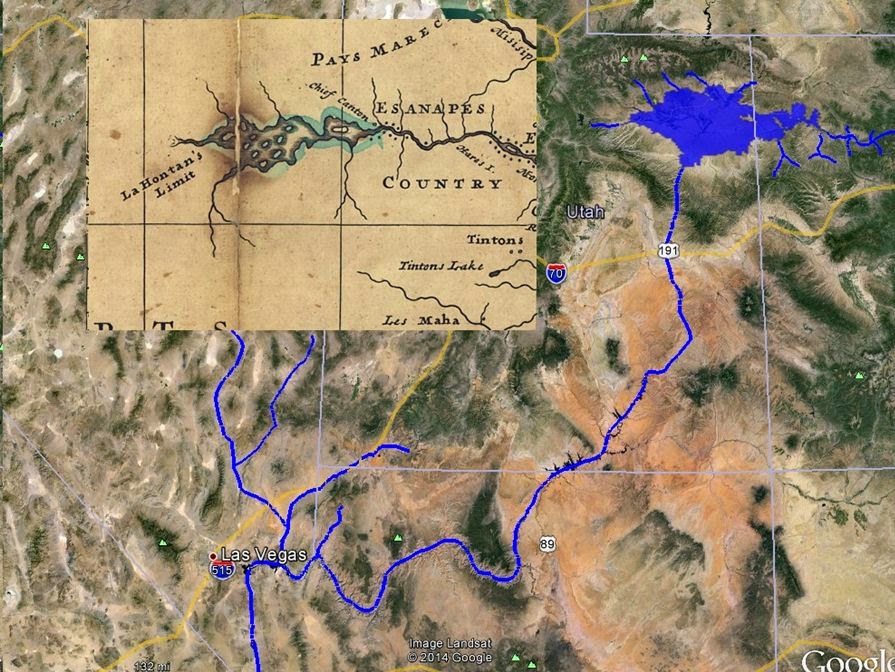 Google Image Compared to the French Moll Map of 1720 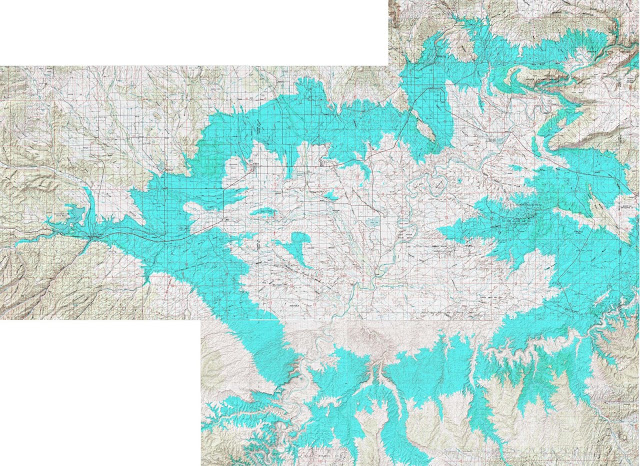 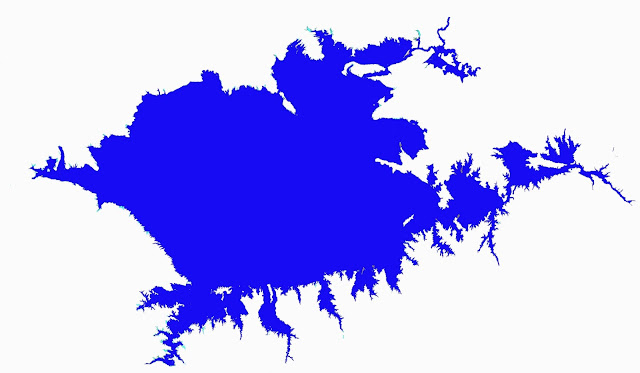 The end results reveals an image that has not been seen for about 1000 years,
NOT 33 million years

(I wish acadamia would trash the C-14 dating system as there is a better way, it's called the Bible) 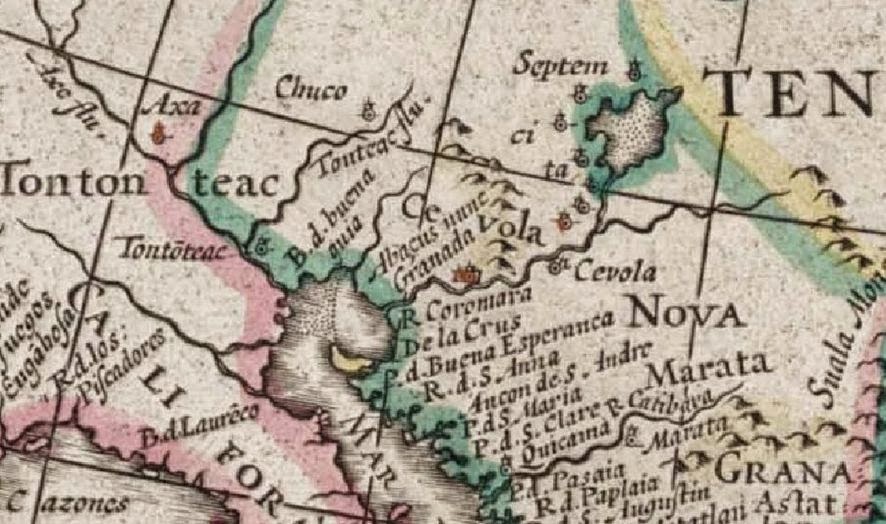 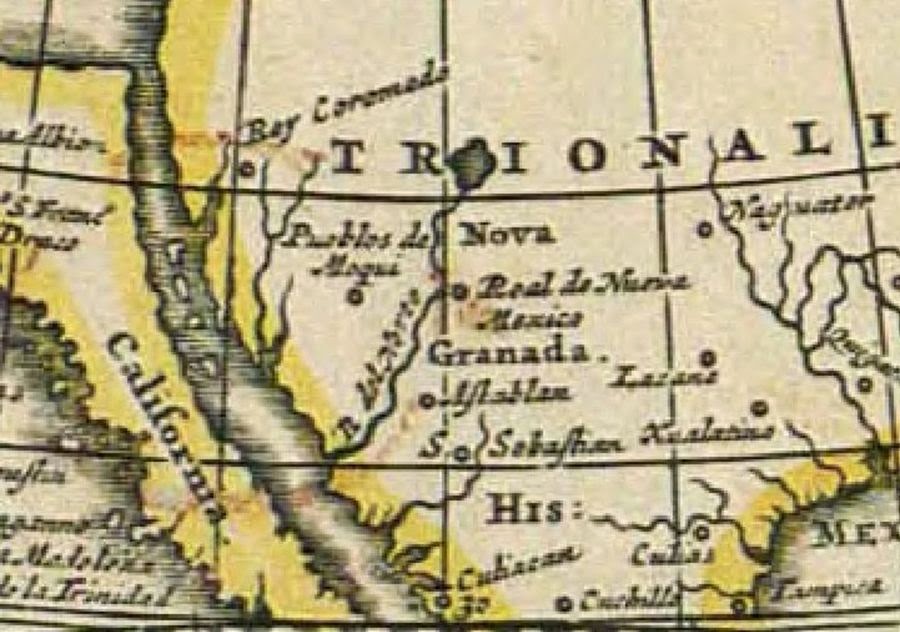 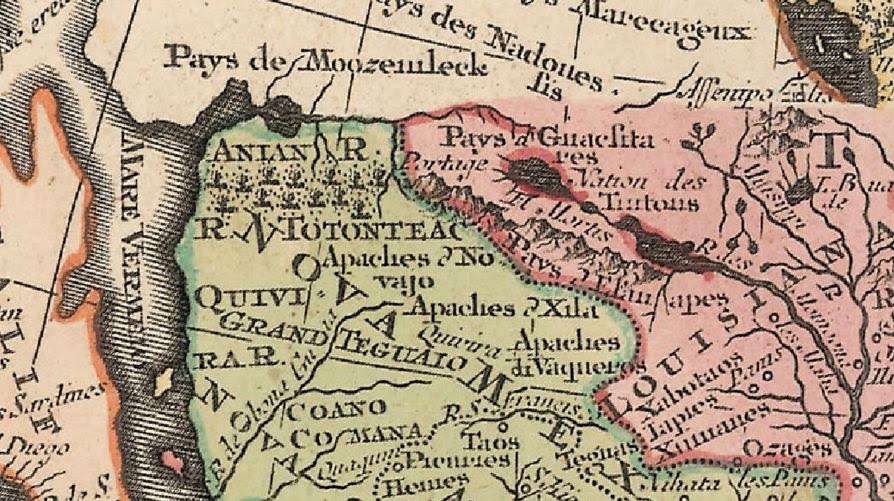 Novus Orbis sive America Meridionalis et Septentrionalis 1730 ()
So where were these cartographers getting there information who are over 100 years apart during which time being at war with each other from time to time? How is that  100 years prior to the others seems to be the most accurate of which I am sure they had limited knowledge of? The answer to all these questions lies within the Roman Jewish Empire who are the originators of these legends and information, who frequented the  as early as 100 BC. They established colonies and built cities over the next 500 years and then lost power around 400 AD and were vanquished by the inhabitants they formerly held in bondage and left the new world only to return and re-conquer it in 700 AD and to be overthrown again in about 900 AD by the Toltec. 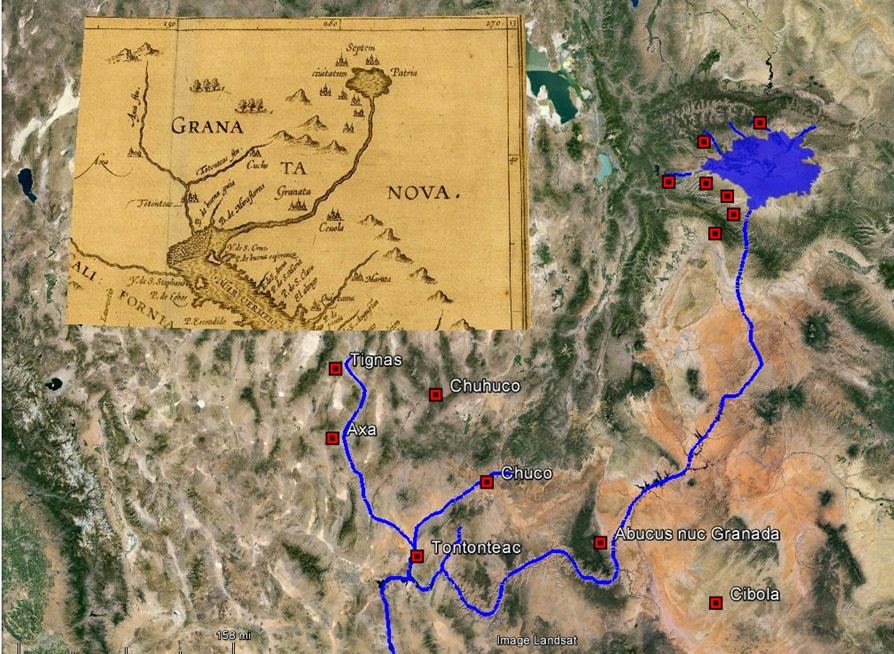 The 7 Cities of Is it possible to find the remnant of these 7 cities?
What was it that was so compelling to keep drawing the Royal Families to this so called mythical place here in ? What is it that is so important that even to this day the full details of the many migrations to this place are still suppress and hidden by those in Rome and of the Royal families? Why has knowledge of the many adventures, wars and accomplishments been hidden away? The records of the Aztec giving details of these things, the many maps bearing seemingly similar information and the many stories retained in the old writings of the British Isles and surrounding, IF you can read between the lines and the see the many archaeological discoveries that have occurred; it would seem the religion of Smithsonian is on it like flies on dung to suppress it and render a hoax or non existence. It is quite obvious there is so much more to the history of this continent, what is it they are hiding and do not want you to know? For a plausible hypothesis, may I suggest a reading of... The Forbidden Histories of the Americas and The Treasures of Utah, But even after this, there is so much more to the story….