How many of my friends, especially those friends in Mexico, knows where this is? If you think you know great! but how would you like to know for sure, and would be willing to go and search for the red stone to verify if it is still there? You would need to contact the land owner to get permission to seek for treasure, however you do not need to seek ;-). I am considering giving this location away to any QUALIFIED individual, a financial partner if you will, preferably someone who wishes hands on participation as it is so much more involved. There is some planning that needs to be done. Thats all for now... contact me... 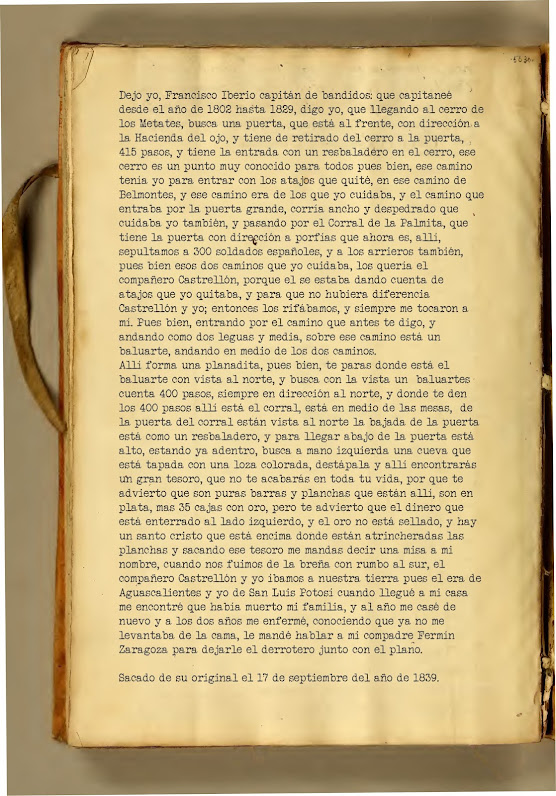 I, Francisco Iberio, captain of the bandits: that I lead from the year 1802 to 1829, I say that when you arrive at “cerro de los metates”, look for a entrance, which is facing towards the “hacienda del ojo” , and withdrawn from the hill, 415 steps, and has an entrance with a slide on (or in) the hill, this hill is a point that is very well known by all, well, this path is the one I had to enter with the atajos that I took, on this “camino de Belmontes”  was one of the ones I looked after, and the road that passes through the large door, that ran wide and “despedrado” ?? that I also looked after, and passing by the “corral de la palmita” that has the door towards “porfias” that is now there, we buried 300 Spanish soldiers, as well as the carriers.  Well, a fellow team member Castrellon wanted these 2 paths that I looked after because he was realizing all the atajos that I was taking.   And so that there not be any differences between Castrellon and me; we raffled them and I always won.  So, coming down the road that I told you about before, and walk about 2 and a half leguas, on that path/road is a bulwark between the 2 paths.

There is a “planadita”, well, you stand where the bulwark is, facing north, and count 400 steps always facing north, and where the 400 steps take you, there is the corral (or yard), it’s in the middle of the plateaus, the pen’s gate is facing north, the ascent to the door is kind of like a slide and to reach the door, it’s high.  Once inside, find on the left-hand side a cave that is covered with red stone, uncover it and there you’ll find a grand treasure, that won’t run out for your entire life because I warn you that there are pure bars and sheets that are there, they are silver, plus 35 cases with gold, but I warn you that the money that is buried on the left side, and the gold is not sealed, and there is a holy Crucifix on top of where the sheets are entrenched and when removing this treasure, say a mass in my name.   When we left the “brena” heading southbound, the fellow Castrellon and I went back to our homes, he was from and I from .  When I arrived to my home, I saw that my family had died and the following year I remarried and 2 years later I became ill.  Knowing I would never leave my bed, I sent him to talk to my friend Femin Zaragoza to give him the derrotero along with the map.