Searching for the Seven Cities of Cibola 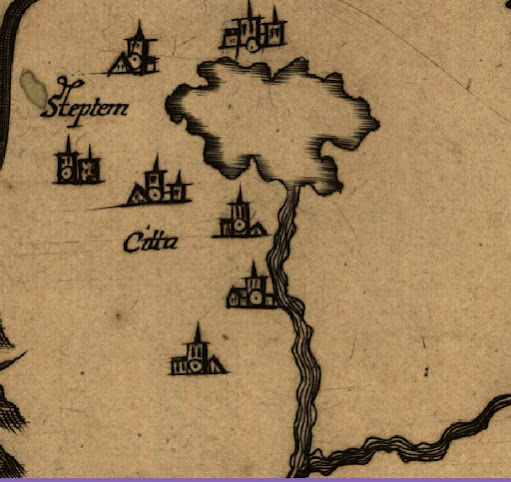 The Mythical Seven Cities of

The topic of this above title first came to my attention some 30 plus years ago, having a deep interest in the mysteries, legends and discoveries of odd origins, not to mention the unusual geography we have here in the west that explanation of, by geologic regurgitation has never set well with me.  At times there have been some who have come forth with opposing theories, I recall watching these over the years as they appeared in the television programming. The theories made sense, and stirred interest but opposition always seemed to stifle further presentation with seeming intellectual comments that amounted to nothing more than “your stupid for believing this” and with no evidence to refute the new perspective, it just disappeared.

Regarding the so called “Myth” of the 7 cities, I read through the various reports of which are touched upon in the writings of the all knowing WIKI, not only to I find what can only be intentional mis quotes, by a playing of words to cause the reader to coward for fear of falling from the good graces of orthodox thinking and opening themselves up to being among the stupid. No one likes to be part of the loosing team. The inability to exercise intellect enabling the ability to validate some theory does not constitute a myth. Designating some thing as a myth is a sure sign, whether true or not, of academic laziness, the Minders of the Mentors! Guardians of the Curriculum!  Its right up there with “recent studies show,” accompanied with no cites. 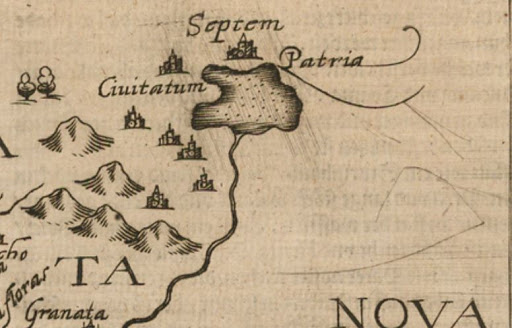 Why for near 200 years would cartographers of various countries continuously include the renditions and ideas of these 7 cities around a vast lake on their maps, if it were just a myth? Were these countries sharing this same idea and image for some unknown purpose? I don’t think so. There is so much more that could be said, but I am going to focus on the positive side, there is no myth until it is proven to be one, and how is anyone going to prove a myth unless they can prove that they themselves made it up? Beside, after obtaining its new academic title of myth, we find there was a lake? I wonder if we can also find that there were cities and maybe even 7. If you have not yet read the article Finding the Legendary Lake Copala and the article The Mythology of Radio Carbon Dating, now would be a great time.

With this said and bringing the 7 cities back into the realm of reason and properly labeled as a plausible truth, legend or even a theory, we look at the many maps beginning in the early 1500’s and surviving until 1700. Many of these maps show the existence and very similar placement of locations, could this be to some degree accurate? If so, there should be some sort of evidence be it legend, myth mentioned in old publications or other. I admit, some of these locations do not have such evidence. However many things are now coming to light and suggestive evidences, publications of the past, geologic evidences and heaven forbid, common sense is beginning to emerge…

Without going into great detail concerning at least one location, it is suspect to sit in a semi populated area and has coexisted with the inhabitants without their awareness of its geologic makeup. Yes the geologist see it, have documented it and even confirmed its existence and its make up but none have attempted to explain its creation which does not fit with the accepted belief of having been created as a result of “The Last Ice Age” or due to glaciations. Although at this time I will not go into the details I will say,  that in order to have had a “Last” ice age, there would have had to been a first.

Another possible location is surrounded by suggestive evidence that most would never see, in fact the primary thing about it is what archaeologist label as “style.”  This suggestive evidence is none other than the typical Native American Glyphs found all around the area of Vernal Utah. This Style as they call it (Vernal Style) is not as a result of style at all. The reason it stands out from all other types of Glyphs is as a result of “subject matter” which if one could open the mind to possibilities rather than resort to the myth attitude, would see that it may have implications of what the area was best known for in ancient times and open the idea that there was no doubt a city nearby. The Vernal Style that these types of glyphs have been tagged as is largely as a result of the Trapezoid body design often found among the Vernal hieroglyphs. This symbol is actually two symbols put together, (symbol combination) which actually creates a symbol in and of itself. The trapezoid is a combination of the square and the slant line. The slant line in its application represents the base meaning of stopped or waiting or some derivative word depending on the panel’s subject matter. The square represents a designated place, man made object or again, some derivative meaning depending on the subject matter of the panel. 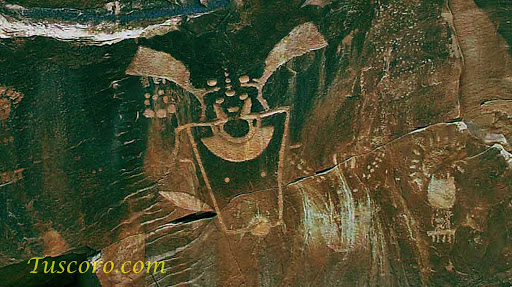 The trapezoid represents “burial place or tomb” and in short, each panel which these glyphs are found is the equivalency of a headstone and obituary all in one. The Vernal area is very similar to the ; there is no doubt an ancient city nearby. This does NOT mean in any way that Egyptian came to . 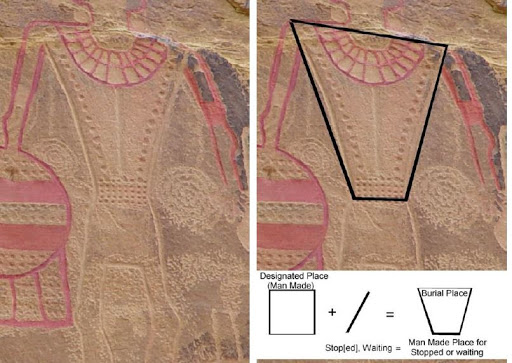 Back to the previous mentioned possible city location with geologic evidence. Keep in mind in any of my assessments I could be wrong, this is a reality but it is not a fear. The geo evidence in this case is supportive in two ways, one it is clear and a fact that a cataclysmic geologic event occurred at some point in the past. Due to the erroneous practices and conclusions of radio carbon dating however, geology would never consider the possibility of a city being buried alive, it is amazing how they ever found the city of . Fortunately it was a well known event and city of the past, if not for this, geologist would have labeled the event as occurring millions of years ago. Unfortunately we don’t have the luxury here in the west to have a continuous written record of events and we all know that all previous cultures here upon this land were mere barbarians post Neanderthal hunter gathers who crossed some land bridge 10,000 years ago, 3,000 years prior to the existence of Adam, Right? Yes… I am being facetious.

Located in a quiet valley in is a not so unusual feature to a majority, but to those who have eyes, it is quite unusual. A group of about 7 combined drumlins exists about a mile and a half wide and a little over a half mile in length with a height of 200 feet or more above the valley floor, and behind them an alluvial fan 100 feet thick containing boulders from football size to Volkswagen size. There are several of these deposits in the land around as evidence of this cataclysm. The question is, were their people here at the time? and how is it the combined 7 or so drumlins were not a continuous ridge line or better put all in one or did mother nature some how form an upheaval containing naturally 7 peaks prior to the event? I suppose it is possible and it cannot be ruled out. 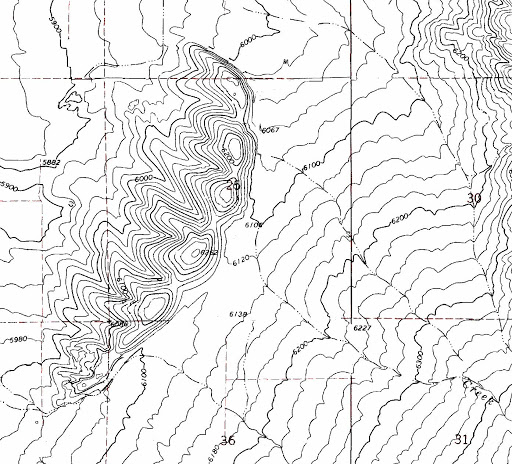 The topography at this place is clear that prior to this event whether it was 1 million years ago or just a few hundred years, was in fact a nice clear almost flat valley. But clearly there was some obstruction evidenced by the creation of these odd drumlins. In order for a drumlin to form, whether by glacial melt or catastrophic flooding, it must encounter an immovable object in order to form. Was it a geographic upheaval of sort? Or was it a city with buildings serving as immovable objects needed in order for these drumlins to exist.

After reviewing the many French, Spanish and other maps showing the 7 cities locations, ranging from 1500 AD to 1700 AD and recreating the possible locations on Google Earth, one of the proposed city locations lands on top of this strange anomaly. According to the Aztec record regarding the place (Aztlan) in which they left some time after 900 AD, it is said they left in humility, could this be the reason they left? A Cataclysmic event that changed everything they knew? Perhaps some day we will know. As for this suspect buried city thought to be one of the 7 “mythical” cities of , we can only wait for ample interest and the means in which to further investigate. If it turns out that the drumlins were as a result of a natural feature then so be it… but what if?... Can you imagine a lost city comparable to that of with pyramids and temples found in ? Although possible, I admit… I admit I do not accept defeat very easily… 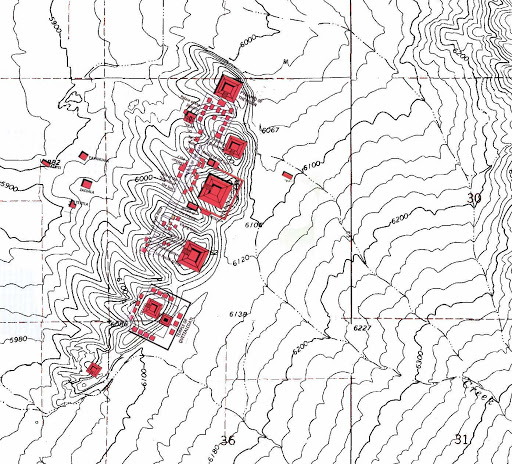