Ancient Exploration and colonization of the Americas

Many of you seekers of truth have heard the stories of Prince Madoc or Madog, the son of Owen ap Grufudd of Gwynedd, King of Wales 1137-1170, unconventional history tells of Prince Madoc who took sail with several ships in search of nothing more than an adventure…. but there is so much more to this story which we will come to shortly, and after this article, we still will not have even graced a small part nor ventured far enough back to the time of the FIRST colonization’s which have occurred in the past on this continent with the exception of those first Americans, dating back even BEFORE King Solomon sent his friend, Hyrum, King of Tyre to the termed “mythical” place of Ophir.

Unlike the usual cry of fowl! Hoax! We generally find regarding unpopular history, today we find from the reliable[?] Wiki writers;
(Notice the choice of word by this Wiki writer which instead of denial, the article is more so apologetic)

The legends of Celtic voyages to America, and settlement there in the twelfth century, led by Madog (or Madoc), son of Owain Gwynedd, prince of Gwynedd, are generally dismissed, although such doubts are not conclusive. The Madog legend attained its greatest prominence during the Elizabethan era when Welsh and English writers used it bolster British claims in the New World versus those of Spain. The earliest surviving full account of Madoc's voyage, as the first to make the claim that Madoc had come to America, appears in Humphrey Llwyd 1559 Cronica Walliae, an English adaptation of the Brut y Tywysogion.[7] In 1810, John Sevier, the first governor of Tennessee, wrote to his friend Major Amos Stoddard about a conversation he had had in 1782 with the old Cherokee chief Oconostota concerning ancient fortifications built along the Alabama River.
The chief allegedly told him that the forts had been built by a white people called "Welsh", as protection against the ancestors of the Cherokee, who eventually drove them from the region.[8] Sevier had also written in 1799 of the alleged discovery of six skeletons in brass armor bearing the Welsh coat-of-arms. Thomas S. Hinde claimed that in 1799, six soldiers had been dug up near Jeffersonville, Indiana on the Ohio River with breastplates that contained Welsh coat of arms.[9] It is possible these were the same 6 Sevier referred to, as the number, brass plates and Welsh coat of arms are consistent with both references. Speculation abounds connecting Madog with certain sites, such as Devil's Backbone, located on the Ohio River at Fourteen Mile Creek near Louisville, Kentucky.[10][11]

There is much more to this story but one needs to be careful with stories such as this, legends have a way of growing, added to until the truth of the matter is so badly tainted, it becomes unbelievable and near unrecognizable.

The above article although certainly not definitive of facts, I thought was well presented although I always love the choice of words used by the writers clearly demonstrating their belief in order to maintain their prized credibility.

What I am about to tell you is also short of the facts, and is presented as a plausibility, based on observation, common sense, and legend but not short of VERY compelling evidences. I would like also to point out to the serious searches of truth, when researching plausible truths, or unpopular hypothesis, always seek out the “original source material” rather than books about ancient history, written by someone 5 to 10 years ago, whose own bibliography lists only books written by some guy who wrote his book 5 to 10 years prior to the first and so on… The results of this type of research results in controlled conclusion to fit the orthodox belief, which is in my estimation suppressed or falsified history intentionally or not with a seeming agenda to keep the sheep from the truth. Understanding the magnitude of this seeming agenda, would shock most. The short of this statement is, there are some, who have almost always known the truth of this continent, and that truth is the very reasons why it is kept from you.

Not so Ancient Explorations and Colonization’s

Prince Madoc was at the near tail end of those who have frequented the Americas in the past, only to have been with or followed by Nights Templars and a few hundred years later, followed by the French and the Spanish. Prince Madoc is at the near end of the Genealogical line of those who have come long before him. Madoc was following a very old trail and knew for the most part, exactly what he was looking for and hoping to accomplish, and in comparison, to those he preceded, he failed miserably yet in another sense likely found great success. Do we really think that the Templars and/or Madoc were kicking up there heals, gathering in the golden wealth and chasing around the world all for the sake of the old wooden cup of a carpenter used by his own 31st Great Grandfather?

WHO HEREIN KNOWS, the true mission of the Templars of which they NEVER strayed from, had great success in, and even died for at the hand of the self-righteous?

The true seekers of knowledge in their quest for historical truth are familiar with the ancient battles and conquests of the Islamic Nations over Christian Nation, there has always been opposition and the battles rage on even today, and history repeats itself because the lusts for power do not change. Oppositions even exist within the two opposites. The so called “Holy” Roman Empire has this same ancient history in its quest to control the Christian and others who refused to be controlled, they who gave themselves this title were not so Holy and set themselves up as the rightful rulers of the world, the opposition within. They have done everything within their power to destroy the true linage of those with the rightful authority to rule. The bottom line here is, if a religion has a history of, or has or is being forced upon you, you have found Satan’s workshop and his followers rarely know it. Our own semi current history and foundation of the formation of the United States as we know it now is an example, prior to the conquest most do not understand, it was known after 1776 as the united states of America of the Free Republic (proper upper and lower case). After the conquest in 1862 it is now known as the UNITED STATES OF AMERICA, or United States of America, the ingenious name of the Corporation, in order to keep you in the dark yet under control.

Ancient Exploration and colonization,
The Tucson Lead Artifact Discovery of 1924

This Holy Roman Empire was not any less deviant and active in their quest to control others in ancient times and an example of this can be found intertwined with orthodox history and artifacts discovered September 13th 1924 By Charles E. Manier of Tucson Arizona.

Of course like all controversial discoveries, it wasn’t long before someone claiming authority jumps in the middle crying hoax, the internet is full of the same regurgitated opinion of Professor Frank H Fowler, I won’t go into all of the anti-truth garbage now found on the internet, the sceptic hands work as well as mine…  However I will give the actual consensus by those who actually have the credentials to comment in this excerpt written by Tara Macisaac of The Epic Times concerning  Medieval Scholar Donald N. Yates Ph. D, and his recent book, the Tucson Artifacts, An Album of Photography. 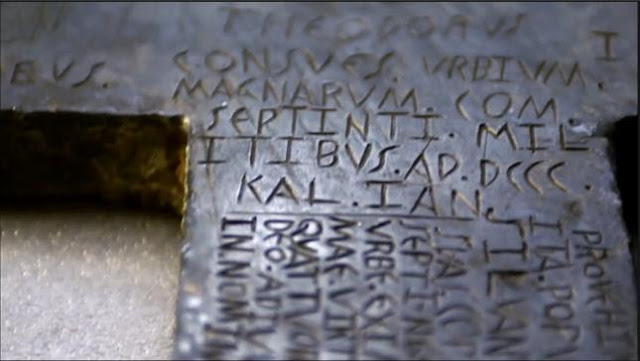 At least 32 cast-lead artifacts, many of them crosses, were excavated from compacted soil in the Santa Cruz River valley outside Tucson. The make of the artifacts and their inscriptions suggest a colony of the Holy Roman Empire existed in the area in 8th or 9th century A.D., Yates said.

Contact between the Old World and the New World is conventionally held to have first occurred with Viking expeditions around the 10th century A.D. Suggestions of contact before this date—and the Tucson artifacts are not the only artifacts hailed as indications this was the case—have long been dismissed by mainstream historians.

The Tucson artifacts have been decried as fake. But Yates says no one with the proper credentials to assess them has called them a hoax.

On the contrary, Byron Cummings, who was the founder of the classics program and archaeology at the University of Arizona; and Neil Judd, who headed the Smithsonian’s excavations at Chaco Canyon, believed them genuine.

“To make that decision, you have to have credentials in certain areas—in Medieval Latin and paleography (the study of ancient manuscripts) and epigraphy, which is the study of inscriptions,” Yates said.

“I’m a classicist, I have a Ph.D. in classical studies specializing in Medieval Latin and paleography. I have a whole row of publications in that very, very tiny specialized area.”

He said another uniquely qualified person to study the artifacts was Wake Forest University Professor Cyclone Covey in the 1970s. “His position was always … [that] there’s nothing phony about them,” Yates said.

You can read more here… https://www.theepochtimes.com/tucson-artifacts-suggest-europeans-made-it-to-new-world-in-8th-century-expert_2017332.html

You can also read much more from those who have no agenda here… https://outline.com/t2CqcC

Continued in PART TWO
Posted by Tuscoro at 7:20 AM