Following the path of the Ark of the Covenant PART TWO

From Adair’s “History of the American Indians” published in London 1775. 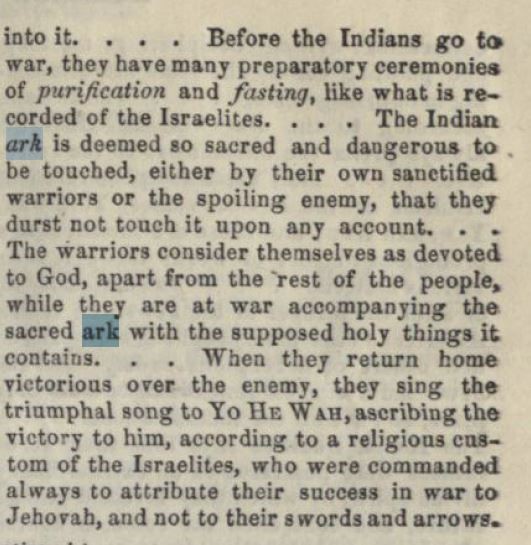 Found in the pages of Peruvian Antiquities by Mariano Eduardo de Rivero y Ustáriz translated to English in 1853 we find on pages 9-10,

But that which most tends to fortify the opinion as to the Hebrew origin of the American tribes, is a species of ark, seemingly like that of the Old Testament; this the Indians take with them to war ; it is never permitted to touch the ground, but, rests upon stones or pieces of wood, it being deemed sacrilegious and unlawful to open it or look into it. The American priests scrupulously guard their sanctuary, and the High Priest carries on his breast a white shell adorned with precious stones, which recalls the Urim of the Jewish High Priest : of whom we are also reminded by a band of white plumes on his forehead.
Whether this is the actual Ark or some species of Ark we cannot know at this time, but we can plainly see that they had knowledge of it. Could the following be another species of Ark? Speaking of the Algonquin tribes and those of the west we have; The History of Ancient America. George Jones 1843, pages 13-15
The Northern Aborigines have a traditional knowledge of the Deluge and the Dove of peace, which to them under the name of the medicine, or mystery bird, is sacred from the arrow of the hunter. They have their Ark of Covenant, in which is deposited some mystery, seen only by the priests of the Tribe,—it is said to be a shell, and supposed to give out oracular sounds; this is in analogy to the Book of the Laws placed in the Ark of Covenant by MOSES, preceding his death on Mount Nebo,—the oracular wisdom of which has guided civilization to this day. The ark is never suffered to touch the earth, but is always raised on a stand of wood or stone; it is invariably carried by a Tribe when they march to battle,—a similitude is here to JOSHUA at the siege of Jericho. When it is in their peaceful encampment, it is surrounded by twelve stones, indicative of the original number of the Tribes of their ancestors;—this is strictly in analogy with the twelve statues (probably rude blocks of stone) erected by MOSES around the Altar of the Covenant to personify the twelve tribes of Israel. JOSHUA, also, after the passage of the Jordan, erected twelve stones in his encampment at Gilgal, and the same number in the river at the place of the passage. They select their medicine men (i. e. priests or prophets) from among a portion of the tribe not warriors; here is the custom of the Levites, or descendants of AARON being in the sacred office of priesthood, for with the Israelites they were not to be taken from the ranks of the soldiery. These Aborigines dwell in booths, as when brought out of the land of Egypt, for they are still wanderers. [Lev. xxiii.] They offer a flesh, or burnt-offering from the chase, which is first cast into the flames, before even a starving family may eat. They have their corn and harvest feasts; also, one in observance of every new moon,—another in festivity of the first-fruits,—
and the great feast in direct analogy with the Hebrew Passover, even to the blood being stained upon the posts and lintels, and the mingling of the most bitter herbs! Then their fastings and purifications are practiced with the greatest severity. The breastplate, or ornament worn by their religious prophets, containing twelve shells, or stones of value, is in direct imitation of the ancient Pectoral worn by the Hebrew high priest, and which contained twelve precious stones, inscribed with the names of all the twelve original tribes of Israel. They have their cities of refuge, or huts of safety, where the most deadly foe dare not enter for his victim. They never violate a female captive, and upon the Hebrew principle, that their blood shall not be contaminated by interunion;—this has been strictly followed in all their wars with the Europeans. They also reject the savage practice of civilization upon the lofty principle of manly virtue!
It would seem that these people certainly had knowledge of the Ark, the way of the Israelites and all that pertained to them. How is it that these writers from the 1700’s and 1800’s seem to have had this information and it appears that today’s scholars don’t? I have never seen these quotes in modern books (with the exception of Dewey Farnsworth’s book).

From Hewett Edgar Lee’s book Chaco Canyon and its Monuments 1936
The Ark of the Covenant appears to have been known. On the excellent authority of Adair, Long and Noab, American Historians and ethnologists, we are informed that the western tribes of the North American Indians kept a holy chest, or ark, which they were wont to carry to the battle field when hard pressed by their enemies. Long says: This ark was placed on a sort of frame carried on men’s shoulders, and was not allowed to touch the ground. To uncover it was strictly forbidden. Three men who, were of curiosity attempted to examine its contents, were stuck blind on the spot.
Articles such as this were abundant in the early writings of this nation, it wasn’t until the formation of Smithsonian that scholars began to discredit the early writers and quit talking about the Ark along with the idea that a majority of the early writers who were WITH the Native people, mingled with them, spoke to them and made a record of their narratives were convinced and believed without a doubt that the Native American people were of Jewish decent. Today, the DNA research in and around the great lakes region and the Mississippi Valley, home of the mound builders, the Adena Culture and Hopewell Culture as the academics have named them, confirms this. 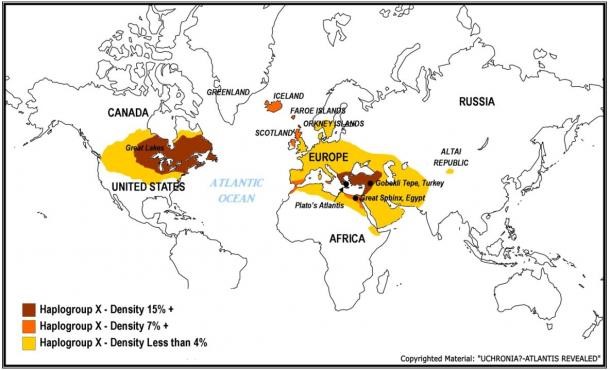 This is no longer a theory people, it is a known fact. Continued in....